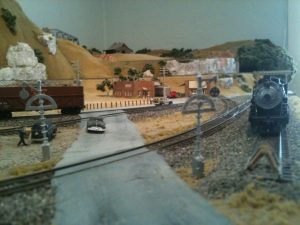 Photo: Ed Cantu (off the top of a truck trailer)

It’s a misty morning, the film of dew drifting over silent fields. In King City, things are waking up. The helper engine pops and hisses on the siding, its steam confusing the mists. The Coast Mail, Train 72, has just made its long stop at the nearby platform, the station help yawning as they heaved the bags up. Now it’s gone, the wig-wags motionless now that their guarded rails are empty.

Over to the left, you can see the head end of the beet string I’d left on the sugar refinery spur the evening before. They’ve been unloading through the night. In an hour or two, a set of units will nose up from Watsonville and drag them off.

Far away in SLO, the yard crew completes work on the Lompoc local. Its bell ringing, 72 pulls into the station, greeting its sister, 71.

The railroad will pause, the clock will hesitate, weeks will pass in our world and then it will start again.