Don’t let anyone tell you doing a book show is easy.

Up at five AM, out the door and on the road so we could make it early to beat the rush in the door (what rush?). The problem is if you plan for every disaster and there isn’t any, you’ve got a lot of dead time on your hands. Yes, we were set up and staffed for a 9am opening. At 6:30am. Oh well.

Fortunately I was boothed next to Rod Sanford, a Florida mystery writer with some shows under his belt. He gave me advice that I found very helpful. For example – think you are just meeting readers? No, you’ve got maybe a sentence or two to pitch the book, otherwise they drift on. I listened to him and tuned my greeting. In the end, his wife bought one of my books – such a sweetie! She told me that after listening to me talk about it over and over, she just had to read it. Hey, I’ll take whatever sales I can!

Thank goodness for Isabella Morgia di Vicari – she did a cooking demo and sent plates of pasta around to the nearby sellers – a very welcome treat when you haven’t had any lunch. And here I’d been wondering where I could get a candy bar. Yum!

Anyway, things I learned – without reference, Early ReTyrement looks like a kid’s novel – the whimsical cover comes across that way. I had a number of people who stopped in looking for a book for their tykes and who knows how many people passed me by, not knowing I was selling science fiction / time travel. The Orlando SciFi club had a booth and I dropped a book off with them – they said they’d heard a scifi writer was in attendance but didn’t know it was me. Next time, my booth information and write-up has to be clear!

Also, I should have mentioned (on my display) that I took credit cards.

I didn’t sell nearly as many books as I’d hoped – and I knew even if I sold anything, I’m still be slightly in the red. But I did get ER to a couple of reviewers and met some new friends and had a great time. And I got to be a writer. Even if it was mostly the hard bits.

Thanks to everyone who stopped and said hi! And double-thanks for those who bought a book! 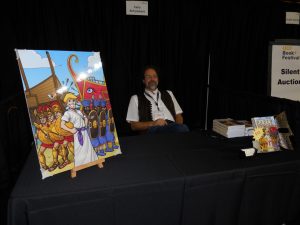