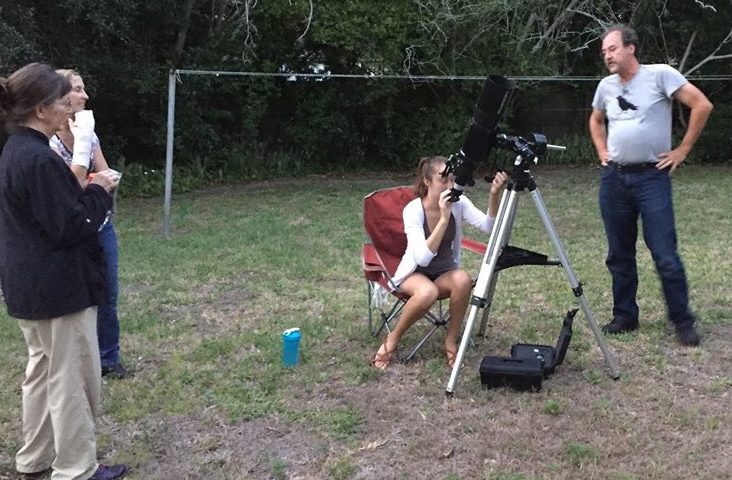 must becoming an astronomaniac. This is the second night in a row I’ve had the scope out.

My brother, his wife and their oldest daughter came out tonight. We had dinner together, then ice cream, and yeah, I was stalling. I was trying to give the moon and Jupiter time to go high so I could show them off. Kirstin (my niece) had wanted to see Jupiter and now was the perfect time. But she had a haul to St. Augustine and couldn’t stay long.

We got home in the dusk – moon was up and half-full, with a big juicy terminus fulla craters – perfect. Showed everyone that (and taught them the controls so they could moon-buggy their view around). Lots of ooohs and ahhhs (music to the amateur-astronomer’s ears). Then a twinkle – Jupiter was in the house.

The problem was finding it.

Turns out that Death Star laser system doesn’t work well as night is still falling. I could put my hand over it – yeah, there it was. But you couldn’t see it overhead. So, to line on Jupiter, we did it the Galileo way – backed down to my lower magnification lens and started sweeping. There! There it was! Only took about five minutes. Let everyone see it once at low mag (in case I screwed up and couldn’t find it again when I stepped up). Then jumped up the view with the Barlow and higher lens, getting about 120x. Nice and crisp and bold – equatorial bands and moons about. With their ability to use the equatorial now, they could keep pace with it so I hardly had to adjust. So it was a good night.

Afterwards, we sat around and tried to identify constellations (yeah, downtown, good luck). Too bad Orion wasn’t up these days – I’d love to show the nebula. Anyway, as of the time of this writing, I’m waiting for Mars to chug higher into the sky (behind the trees now). After all, the next time I’ll have the scope up, it will be the weekend star party and I won’t get a chance to look down my own barrel. So I’m having a look tonight. I’ll tell you how it goes after the picture… 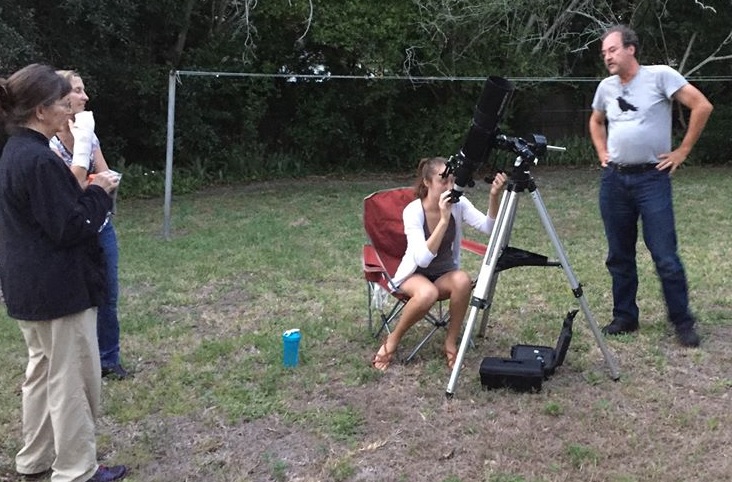 Wow. That’s all I could say.

Mars didn’t cooperate. It didn’t come up through the gap I’d figured. That meant I had to shift tripod and scope 50 feet over to a new viewing spot. Also, the sky overhead was layered with clouds – east was still clear. And there it shown, orange-red.

When I swung the scope online (laser works just fine now) I could see it at the same size I see Jupiter. Here, it was orange, with the southern highlands visible as darker brown (upside down, because of the refractor). I think I could make out the polar ice cap (but I’m not going to say definite – Percival Lowell haunts my thoughts). But I looked at it for a good half-hour, just letting my eye ease into it. Really, I’d never seen that sort of detail before (It’s been an tiny orange sphere until now). So, yes, worth the late night effort.

All in all, a very enjoyable night under the stars.

>>>I NEVER WRITE ANYMORE, NOT WITH ALL THIS STAR TIME. BUT I WROTE. CHECK OUT MY NOVELS HERE!<<<