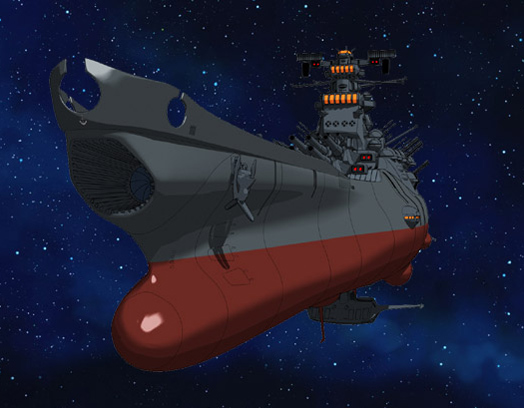 Retelling a story, especially a classic, is always dangerous business. Movies are generally updated (“reimagined” as Hollywood suits refer to it) to suit newer (i.e. duller) audiences. As for books, its generally not done. The major exception to this are those “zombies” and “robot” editions of classics, but that is, of course, simply a parody (and a rather stupid one at that).

Normally I focus on written storytelling, but this weekend I had a curious episode of visual storytelling (i.e. a movie) that had been updated for a modern audience. It was none other than Space Battleship Yamato, based on Star Blazers, a Japanese animation from the late seventies that my college roomies and I were hooked on.

This arrived in the shadow of Star Wars. It was a character-driven story with progressive arcs, so you had to watch it in order. In a nutshell, Earth is being bombarded with radioactive planet bombs, until it is nothing but an orange dusty ball with humans living beneath the surface. The radiation is going to kill us in a year, we’ve just lost our last fleet, all is grim. Then Queen Starsha of very distant Iscandar sends us technical plans for a wave motion engine and the location of her planet. If humans can make the journey of 148,000 light years (and back), they can save their race.

Of course, the only hull we can use in that short of time is that of the World War II super battleship “Yamato”. The ship is outfitted for space, and off we go, blasting the Gamalons (and getting slagged in return). You never saw Kirk’s Enterprise show damage. The Yamato was literally ripped open at times, and we groaned when it was.

We’d seen where those blue Nazis, the Gamalons, came from – it was a green planet with yellow spots. But Iscandar, that was a blue planet with an island that more than just a little looked like Japan. What wasn’t clear (and when you rewatched it, there are hints all over) was that when you saw images of Iscandar, there was a greenish, yellow-blotted planet floating close it it. Yes, Gamalon and Iscandar were sister planets in the same orbit, meaning as the Argo (as the Yamato was known) drew closer to its goal, it also grew closer to danger.

Of course, the Gamalons drug the Argo into their hallow planet, with the same outcome as if you dragged a tiger into your house and locked the door behind you. So much for them. After a couple of final close calls, earth was saved. Hurrah!

And let me say right here that Spoilers Follow!!!

Now, in the 2010 live action remake, it turns out that Gamalon and Iscandar are a single planet. and that the Gamalon/Iscandar race are one and the same, crystalline creatures operating under a hive mind, their planet doomed. Gamalon is the more powerful faction, the side that wants to Terraform (or rather “Gamalonform”) the Earth. The “Iscandar” faction has been isolated beneath the planet but has still contacted Earth, desperate to save them, even at the cost of their own race. But, as with the original, we show up, the Gamalons jump us, and we beat the living shit out of them.

The fans weren’t happy about this. They tended to see this take as a corruption of their mythology. They wanted blue Nazi Gamalons and willowy Starsha. I did, too. Until I saw the movie.

Here’s the deal. The twenty year old Robert Raymond was happy with a race of evil jackbooted thugs who could be diced with Tachyons without mercy. Leader Deslok was cruel, creepy, and (frankly) slightly gay (though he would turn out to be a noble foe in the end). To me, it was very thrilling space opera.

But as a fifty-four year old author, one who struggles with the mysteries of the cosmos and why things are as they are, the idea that we could encounter a race in the depths of space who were humanoid (if only blue, and perhaps gay), who made uniforms with medals, who drank wine out of cups, who thrashed their underlings with horse whips and had buttons on their shirts, well, that seemed coincidental to the extreme. That two dissimilar races could even share a technology subset that would result in a prolonged galactic war (and not the simple flashing destruction of the inferior race) is very unlikely. It raises concerns of shared ancestry, of common heritage, of deliberate seeding.

I’ve grown up. In ways, audiences have grown up, too. As writers, we need to remember this.

We don’t have “budgets”. We don’t need to costume aliens from humans with painted skin and rubber ears. Likewise, in our fantasy novels, we don’t need to always have dwarves and elves living in kingdoms the size of Connecticut. We know better. Our worlds and universes need to hold together. Anything fantastic or alien needs to be just that. In this case, the Yamato writers realized that sneering Gamalons and a gossamer space queen would look silly in the reality of the big screen. And they were right. I can believe that a WW2 battleship can fly through the air but I can’t believe in blue space Nazis. Not anymore.

Always try to break out of the pack, to give your readers something new and different. Don’t go overboard. Just try for new, fresh ideas. Sure, there aren’t a lot of new ideas out there. But trust me, there are PLENTY of old ones.

You’ve got to go where no man (or woman) has gone before. And to take us with you.

>>>IF YOU WANT TO GO TO AN ANCIENT WORLD YOU’VE NEVER SEEN, CHECK OUT EARLY RETYREMENT<<<