oke up today and JB gave me a Valentine’s Day card. In return, I gave her a dumb look. Totally forgot, given the strange background we find ourselves in. But it was a sweet gesture. 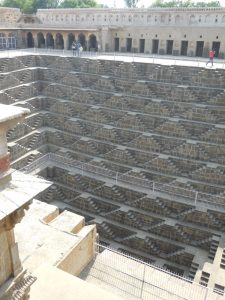 Pretty much a transport sort of day. In the morning, a quick run over to the Palace of Winds (where the ladies of the court could spy on the street from their perfumed sitting rooms in the sixteenth century). Then we hit the road for the Step Well of Chand Baori. What’s a step well? Well (snicker), imagine that you have to go down thirty feet to get to water, so you put rows of steps to allow access. But what if the level drops again, and now you are sixty feet deep. One hundred? Two hundred? These steps, like those famous Escher stair woodcuts, go on and on, forming mind-bending patterns as they drop ever deeper. Nothing short of amazing. And right next door was the temple devoted to Harshat Mata, goddess of joy and happiness – a goddess I could really get behind. Some of her carvings were quite the eye-popper.

Then lunch at an outdoor camp-ground/spa. Food was meh (I don’t like bones in mutton curry – crunch crunch). Then we were back on the road. Even though it was Sunday, traffic was heavy, cars coming into and off of the highway. I looked at India scrolling past – it never gets old for me. Thousands of road-side stores: men loitering, camels cudding, pigs rooting, women harvesting. On and on across fields of wheat and mustard, under the shadow of the brick kiln chimneys. On we traveled across the hours.

We were passing bikes, camel-carts, brick trucks, driving directly at oncoming cars, white knuckle stuff. The road is narrow, damned so, and potholed to hell. And you’ve got everything from pedestrians idling along, joggers (I couldn’t believe that guy), cyclists and motorcyclists, transports and rushing oversized tour busses such as our own. We’d swing out and dare motorbikes to keep to the lane, literally forcing them off the road while completing our dangerous passes. A couple of times I was certain we’d hear the grind of metal as we buffed each other. But on we flew, in and out of our lane, honk honk honk!

In the end, we made it to our hotel, a massive opulent sprawl, decedent and luxurious. I don’t think I’ve ever seen anything this lavish – it’s about 200 yards of marble halls just to get to the front desk. I’m going to like it here.

Post note/ day six: Having problems sleeping – I think it’s the sensory overload of India. I wake up at 2am with my mind awhirl about one thing or another. Last night, I figured a great way for photo hawkers to do better business with westerners. Just lay where with my mind spinning, thinking, I gotta sleep…

>>>IF YOU CAN’T WAIT FOR TOMORROW, BUY A BOOK TONIGHT. THAT WILL SEE YOU THROUGH THE TIME GAP UNTIL OUR NEXT INSTALLMENT<<<