oday was our trip to the Ganges. “But wait,” you say. “I’ve already read this.” No, this time it was to see the sun coming up over the Ganges, a time of prayer. But in starting the day off I got two pieces of bad news. First, my sister had explosive Ebola-level liquid death (likely from that Air India sandwich she ate on the short flight out – two other people were down for similar reasons). And then a good friend, Ed Rieg, had passed away. So I had a lot on my mind when we pushed through traffic (human, vehicular, bovine and beggerish) to get to the Ghat (the landing where we would launch from).

We pushed out into the sluggish water and slowly rowed up current, watching to the east. Eventually a low red ball burned its way up through the haze like a smelted coin in a bucket of ditch water. Still, it was lovely in its Indian way, just glowing over the eastern sandbars, the boats and their worshipers.

So I stood up in the boat, faced the sun, and prayed for my sister and Ed. It seemed like a fitting thing to do. 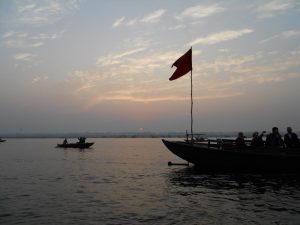 Then we were attacked by river pirates – two boats latched on to either gunnel and started selling us stuff. I bought some beads for a friend and JB picked up some stone elephants. Once we landed, we saw a huge stone map of India and toured the Banaras Hindu University. All nice.

After pushing our way home, we got to eat breakfast and then walk next door to a silk manufacture. Watched the whole show, listened to the pitch, and had JB buy a couple of nice scarves for herself (I could tell she really wanted them) – otherwise, she’d have not done it and then regretted it (verbally) for the rest of our lives. But when it comes to buying things, we hardly have much at all, couple of scarves, couple of dresses, some trinkets (two bead strings, six tiny elephants (two divine, the others standard)) and that marble table. But considering some of the members of the tour who are hauling out trinkets in bulk, we’re pretty modest.

Then our final tour – went over Sarnath, the holy city where Buddha originally preached. They even have part of the banyan tree (through cuttings and regrowth) off the original he sat under. Walked through an old temple complex (again lost, again discovered by the curious English (“Jove, yet another lost city, wot?”). Also toured a Hindu/Buddhist museum full of things recovered from that site. Then home in time for our final dinner.

And we’re pretty much done at this point, other than the travel (I’ll blog anything of significance besides my aching ass and red-eyed endurance). But I’m dreaming of sedate traffic, quiet surroundings, blue skies and juicy pizzas. Yes, it was a trip of wonder and amazement but it’s also a trip that took a great deal of endurance to complete. I’ve seen India, loved it, understand my coworkers a little better, and will be all too happy to be home.

>>>IF YOU LIKED THIS, YOU SHOULD CHECK OUT MY OTHER BOOKS, AVAILABLE FOR VERY CHEEP PRICES (NOT IN RUPEES) HERE!<<<