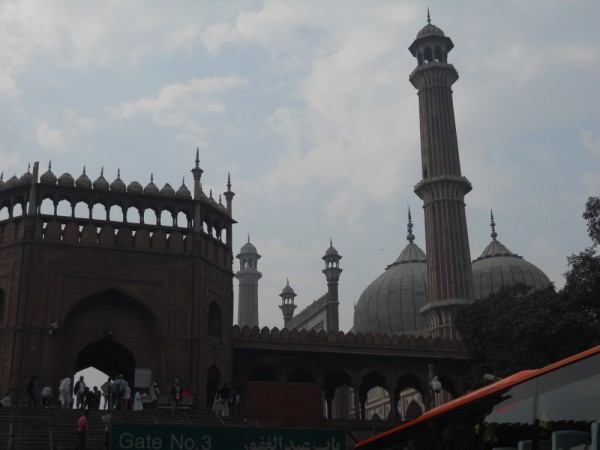 he day actually started at the airport – we got in at half-past eleven in the evening. The Indian tourist visa deal was a pain; it took an hour to clear it what with the dodgy fingerprint machines. The van ride in to the hotel was hectic; dark and smoggy and honky. When we got to the hotel, ready to crash into bed, first we accidently rode the elevator down to the basement then found out the room card wouldn’t allow us access to the elevator buttons. Finally someone coming up gave us a lift back to the lobby. After getting the cards recoded, we went up to the room, got out all the beddy stuff, and when I put the power converter followed by a surge protector into the socket, the protector just blew up. Took the entire room down, not a light in the place. Had to call down for maintenance to come up and toss the breaker.

But happily, even with four hours of sleep, the day before had been a short one, nine flying-against-the-earth’s-spin hours. So we were fine.

So we started by going to Old Delhi. Amazing to look out at Delhi with its population of seventeen million. Dirty, yes. Littered, yes. Smoggy, very. But still a sprawling, honking, bustling city. We crossed to the Jama Masjid, a huge mosque. I wished I’d brought my camera in (there was a small fee that I balked at). Had to swap out my shoes for slippers; the flagstones were cool but the air warming. It was quite an amazing place, with its minarets and spiraling kites, its pious attendees, its surrounding sprawl. We just walked around the courtyard, just marveling.

After leaving, we were then treated to a cycle rickshaw (basically, a bike with a carry-seat in the back). And off we went down little back alleys and twisting markets, the lanes like sharp caverns, cycles going both ways and motorcycles honking and overtaking and, by a miracle, not hitting anyone. There were snarls of electrical wire overhead (often with monkeys playing amidst them), wandering dogs, everyone selling everything, litter and trash and people darting about in glorious chaos. It was a total mindbend of how urbanization works at its base level, for good or bad.

After that, we went over to the place where Gandhi was cremated, a beautiful memorial garden. Fat bees buzzed in the breeze-nodding flowers. Then back on the bus, over to a nice lunch place, good food with the group (JB and I shared rice and curry and naan). Then a ride around the administration core of New Delhi, the place the British built to rule this land from, with the foresight to finish it right before they lost it. 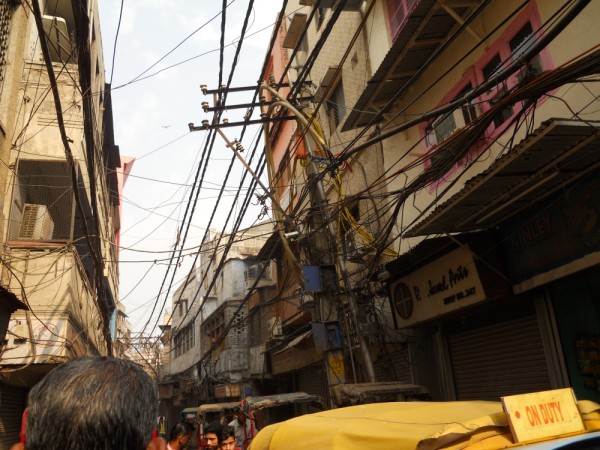 A tour of a Sikh temple, one where they a day-long service/ceremony all around a holy book. Had to go in barefoot with a scarf over my head, a real pirate. Amazingly, everyone in this temple volunteers for everything. They pump out a massive number of free meals every day, all done by people just tossing in a couple of hours. It was really an amazing show of socialistic charitable pageantry, something that rocked me back on my dirty heels.

After this, we rode over to Humayun’s Tomb, a stunning mausoleum the size of a palace, all built in Arabic architecture. Just hung on the wall for a bit, looking out over Delhi, wrapped in its smog and noise like a couple of bawdy brawling houris.

Wonderful dinner with Pat and JB in the hotel lobby, a buffet you couldn’t go back to enough. Then we came upstairs and I decided to add spice to the trip with the most ironically stupid thing I could come up with. Took my malaria pill and washed it down with half glass of tap water, done without thinking. So now I’m under the cloud – did I just give myself Delhi Belly? I have no way of knowing right now. Took two Pepto-Bismol pills, drank a whole bottle of water, and am now waiting, seeing, and peeing. I guess this blog tomorrow I’ll know if I suffer the karma of distraction. So we’ll see, with baited bowels.