e’d opted for a special day tour of Mt. Fuji through the hotel. So, of course, the day dawned cold and drizzly. Oh well, at least we’d do a day trip out of Tokyo and see the countryside.

The bus start was chaotic – between the drive and guide yelling back and forth, it sounded like a Chinese junk sinking. Finally got on the road. Even with the light rain, JB and I agree, a bus is one of the finest ways of touring. Unlike trains (where you see the backs of houses), from the bus window you’ll see people and businesses and streetlife. You can see into shops. You can see into cars. You can look at houses and down alleys. So while the guide recounted every known fact about the unseeable Fuji, we swept along, enjoying suburban (and, eventually, rural) Japan. 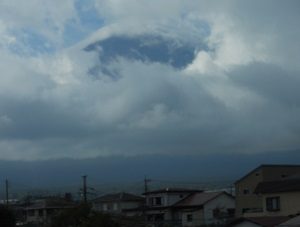 Then, while the bus swayed down a long lazy valley, the guide pointed out Fuji. And there it was, sort of, literally shrouded in mists and with gale-driven clouds cresting it like a bad presidential combover. It was like that silly monster movie where the huge creature isn’t seen, not clearly, no, through most of the movie. You could only glimpse it, see it peripherally. We never got that picture-perfect view.

But still, the day was fun. We drove up to the fifth station (the highest point cars can reach). Avoided the shmaltzy tourist shop (though still someone unloaded a bell on me. It’s still tinkling in my jacket pocket). From our windy position on Fuji’s shoulder, you could look down through broken clouds into lush agricultural plains. And above, two scrubby lava-rocked slopes led to… a hazy indistinction, nothing more.

Then down to Hakone. Apparently this prefectorate produced ninjas – stopped in a ninja-themed restaurant which was as silly as it sounds (though the food was good and the servers elven-cute). Then to Lake Ashi where we rode a pleasure catamaran which inexplicably backed he entire five-mile trip to the lake’s far end – it was like (and I wondered if it might be) that the boat was on rails. 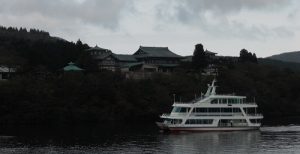 Once ashore, we crowded aboard the Hakone Ropeway (i.e. cable car). Again, where Fuji should have loomed in volcanic glory, just a vague hint. Worse, the upper station of the lift was socked in. You could see about twenty feet and that was it. So down we went. Literally nothing to see here. With time on our hands, JB and I shared a green muffin thing that was quite good.

The ride home was long and arduous. I watched people and places scroll by. Eventually saw the blessed twin summits of the Municipal Government Building. We were dropped at Shinjuku Station and so I got to drag a griping girl – JB hates that walk – all the way home.

Now we’re packing up. Tomorrow is #1 with a bullet!

Fun Fact: Japanese bikes are usually not locked up, not that I can see it, that is. A Japanese woman at work says that there are front locks but, no, I didn’t spot any. I saw people just ride up to stations and businesses and leave their bikes there.

Fun Fact 2: Japanese ride their bikes on low tire pressures. Me, I top the air at least once a week. But sitting in cafes and watching them roll past, I noticed how many bulging tires there were. One guy actually rode past with a full-flat rear tire. I don’t know why this is – is there a Japanese racial aversion to tire pumps?