unny thing: in the morning, waiting for our guide Mike to take us to the station for our trip to Kyoto, we explored a below-level stairway (by exploring, I mean to say “dragging a reluctant JB into a new situation”). Anyway, what we found – Morlock Town!

From Shinjuku Station all the way to the Municipal building there is a massive complex of subterranean pedestrian tunnels. When we were down there, there was a flood of salarymen all flowing to the huge western office blocks. And to think of all the street level hassles we’d waded through for days – cross-streets and darting bicycles. A real waaaa-waaaa moment.

Anyway, Mike got us to the primary station and bought us lunches – such a nice guy. Then we boarded the sleekly futuristic bullet train (while chatting with fellow Americans about how shitty Amtrak was). 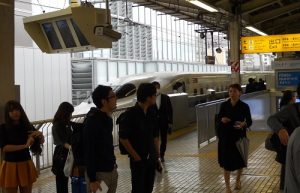 How can I explain gliding at 181 MPH through dense city blocks, all while reclining in a comfortable seat. And it was quiet, the Japanese mass-texting as they always do. I shot some photos out the windows, a movie or two, but took it easy.

And then Mt Fuji! Or so I thought. At the time Mike said we should see it, I looked to the side and there was my nemesis – Cloverfield – still shrouded in fog. All I could see was the huge base and no summit, so I supposed that was it.

Then, about twenty minutes later, an oddly conical mountain hove into view. Could this be Fuji? Broken clouds slipped past the summit and nobody around us looked up from their phones. So I took some careful pictures and really studied the undulations along the crest line, committing it to memory. I’d have to check.

After a smooth two-hour ride (you’ll remember it took three hours to get the castaways to their island) we arrived in Kyoto. And Yaji-san, our delightful swan-like host, met us and taxied us to our downtown hotel.

So Kyoto is a crazy town – two major streets, N-S and E-W, with the hotel right at the crossing. It’s comparable to Orlando in size but far outstrips it in service. Where we have one metroline (sad little Sunrail) they have two subway lines (right down the middle of those streets). And as we were to find out, their bus line spans the city (well, pretty well). 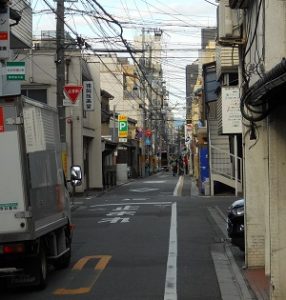 First thing, JB and I wanted to post those hair rods home rather than have TSE identify these cultural items as a security risk (to Americans, what isn’t a security risk?). So, with a combination of Charades and Post Office, we got our forgiving lady postal clerk to help us package up JB’s swag and ship it home.

After a nap in the room, we headed out into the early evening. It turns out that Shinjo Ohashi (the road east of the cross-streets) is a fully-lit shopping district. Stopped in one street-front joint where I got the best pork-n-rice bowl I’ve ever eaten (along with a bottle of beer big enough to immolate a German tank with). After this, we promenaded the boulevard, just taking in the evening sights, poking into every little shop. Got ice cream at an unlikely Baskin Robbins (two stories, seating upstairs with really old music coming out of the speakers (Tina Turner’s We don’t need another hero?)). Went into my umpteenth manga store (since I don’t know hardly any of it, it makes me realize how out of touch I am (“Young whippersnappers. In my day, we had the Yamato!”)). And finally, home in the room, another full day!

Just so you know Department: What I saw WAS Mt. Fuji! Checked it on the hotel computer. So I guess standing on it doesn’t make a difference – it’s more important to see it!