vernight, JB and I were both restless, both worrying about that 3am wakeup alarm. What could go wrong?

But the trip to the airport was a breeze, security easy and casual. The fight to the first stop (Texas, another foreign country) was full except for one seat on our row, the empty seat making picking up extra sleep a little easier. And unlike Newark on that horrible rainy night so long ago, Houston was sharp. Crisp gate instructions, good signage (a color-coded E turned into a back-and-white E, which cost us one hundred paces each way). So we settled in for the long jump, Houston to Tokyo.

Thirteen hours on the plane. Hard to do. Watched Solo and American Soldier. Tried to watch Ready Player One but it was a bit afield from the book. And finally, after movies/reading/videoing and catnaps, we were making our descent over Haneda Airport.

The bus in was easy. We should have had it arranged as part of our limited tour (they were handling one day of guided sightseeing in both Tokyo and Kyoto, but we’d come early). I’d pre-scoped it and knew exactly what to expect and where to go. 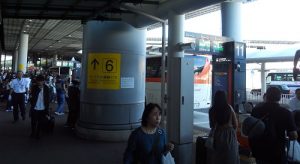 We rode the bus with wide eyes, taking in all the alien forests and eventually buildings. A little confusion at the hotel – we were told we’d base out of the Shinjuku-Washington for our two extra days and then trudge four blocks up to the Hilton. But we were in Shin-Wash the entire time (I hadn’t noticed the change in the tour docs). Fine with us. The Tokyo guide had left a welcome package so we were all set, and Tokyo was ours for two days.

We’d gotten settled in and went out into the early evening. The Shinjuku area is in the western part of the city, centered around a massive train station (with not just shops but a huge department store). A million commuters come through every day. The landscape is one of order and purpose, huge skyscrapers, wide streets, rushing phone-locked commuters. We walked up and down the boulevards, just taking in the fact that we were now on the other side of the planet. It was quite a place, and the adventure was only beginning.