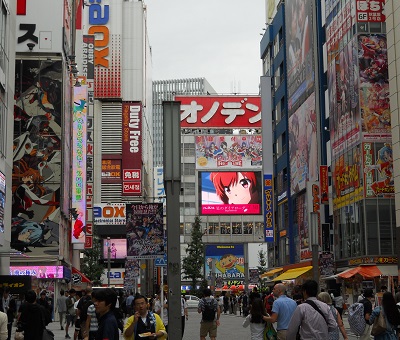 fter a nice “American breakfast” (which was a casual-slow ordeal and had things I’d never seen in a rodeo cookup) we slipped out. Strolled through the Shinjuku Golden-GAI district (narrow streets catering to electronics and eateries) but in this early hour everything as closed and the only motion were the cut-through high-stepping commuters. Nosed into Shinjuku station but were unsure what to make of it, with the noise and flow of humanity. Backed out of that madhouse and decided to look in a different direction.

Just west of the hotel, in the shadow of the fifty-story Metropolitan Government Building, there lays the beautiful Shinjuku Gyoen Garden. We drifted through its quiet early-morning lanes and slipped into a shrine. Found a young couple getting ready to be married, with a small crowd of moms and a photographer. And one mother was quite nice; she had us share a photo with the bride and groom (she didn’t quite understand my weird focus settings). 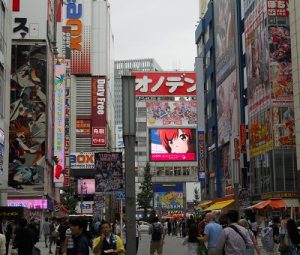 We also walked by “Niagara Falls”, a little artificial waterfall that started up just as we were passing (how hauntingly reminiscent of the Eiffel Tower doing that exact same thing years back). We also chatted briefly with a Toronto couple who gave us valuable tips to getting subway cards. Went back to Shinjuku Station and got it to work this time. With total freedom of travel now, we crossed over to my big thing – Akihabara! This is the huge manga (comic) anime (cartoon) nerdfest geekout section of Tokyo. Just stunning – block after block of stuff. My favorite was the Shosen Book Tower, a building with the footprint of an American pharmacy but stood ten stories tall. We got pitched by maids from the cafes, saw all sorts of animated movie trailers (new one for SteinsGate). Had fruit drinks out of street-side vending machines. Later, stopped in a hole-in-the-wall miso soup joint (you ordered from a machine on the door and handed your receipt to the cook, then had a seat at the bar). Great place! On the way back, we dropped off at Jimbocho Station to check out the Kanda Second Hand Books area. Of course, everything was in Japanese but it was still fun to nose through their stacks.

After an afternoon nap (I love these when I travel) we went up to the top of the Tokyo Metropolitan Government Building, up to the observation deck on the 45th floor. Great view of the city which runs all the way to the horizon. Could just make out Mt Fuji (a hint of a shadow in the gloom of dusk).  Once we’d checked out this, dinner time. We chickened out and ate in the hotel, in a little “Italian” restaurant in the basement level. The pizza was strange but pretty good, with a crust rather like Indian naan bread (which made it about the best pizza I’ve ever eaten). Then we walked through the nighttime Golden-GAI district (now in full swing), just to bask in the crazy neon of the place.

Travel Note: A very interesting trait of the Japanese people is their use of crosswalks. I don’t think I ever saw a single jay walker. But they would patently wait for the walk signal before starting across the intersection, even if it was in front of a narrow side-street and nobody was coming. I did see one or two cyclists skip lights but nothing like the US or Amsterdam. The civility of the Japanese people was something I’d notice over and over in our trip (and, sadly, its contrast once we returned to the states).