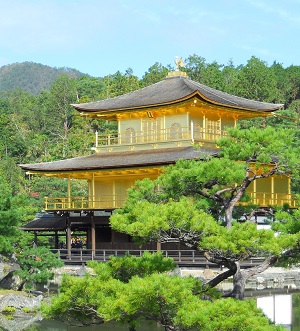 onks at the buffet; what?

Apparently there was a monks convention in Kyoto and a number of monks were in our hotel. Came down this morning and saw two (in full orange robes, heads smooth) spooning up the scrambled eggs. Funny thing; as we sat at breakfast, more entered. But they didn’t sit with the first set; two sat apart and one alone. You’d think there would be temple shop-talk and nirvana sightings but no. Seems that monks put their robes on one leg at a time, the same as everyone else.

So Yagi-san showed up bright and perky to show us the Kyoto sights. Apparently JB is going lame – ankle problems today – so I’ll have to shoot her. This did slow down the pace a bit. 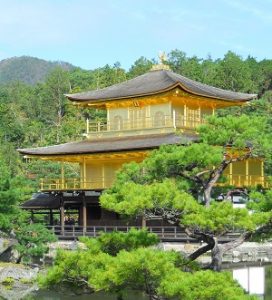 Anyway, first up was Kinkakuji, the Temple of the Golden Pavilion. And that’s what it was; a gold-plated temple that shown like a fall leaf over the beautiful lake.

In contrast to heavenly desires, we moved on to earthy ones. A cross-town bus got us to Gion, the famous geisha district. While we didn’t see any Geishas, we did see more and more girls in traditional kimonos. Turns out that it is really popular to rent one for the day and parade around – that that I’m complaining – they were so cute. Some of the fellas let their girls talk them into traditional robes as well. Yes, it was interesting to be on a narrow street in that infamous district and see two kimonoed ladies shuffling your way – suddenly it was 1925 all over again. 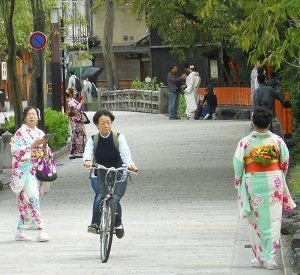 After this, lunch. Yagi-san took us to a nice socks-n-sit down traditional eatery. Very curious; you had to crawl through a low three-foot high opening to get to your table. We chatted about this and that but either I was too outgoing or she too shy – I felt like a Yankee trader newly ashore, damning everyone’s eyes.

So, the first of the thousand – Fushimi Inari Shrine with its thousand(s) of torii gates. In this, imagine a path leading under an orange gateway, the traditional type. Now think of them lined up, one every foot, a corridor of gates for miles. It was amazing. And too much for JB. I’m not sure if Yagi-san really wanted to do the whole course either but when we got to the weenie-bailout gate, JB had us peel off. Oh well; seen one torii gate, you seen them all.

Then a train and a bit of a hike to Sanjusagendo Temple, which is the largest wooden building in the world. And inside is a huge statue of Buddha surrounded by 1001 life-sized statues of Kannon, the Buddhist goddess of Mercy. Since no pictures are allowed you are just going to have to imagine it – Buddha in the center and then rank after rank of gold-leafed goddesses, stretching into the distance. 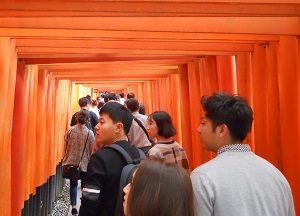 One of the things they do at this temple is archery competitions. And they did relate the story of one boy in the 1400s who shot off 13,500 or so arrows at the rate of nine a minute, and he hit his target over 8000 times. Amazing!

Fun Fact – Toilets. Yes, they have them in Japan (as well as the squatting ones). But the toilets are space-age. In one place, I sat on one where the seat warmed up and it played nature sounds. You could also pick music and have it turn into a bidet (note that I didn’t touch any of the buttons, given this danger). On the bullet train, the toilet had a button to raise and lower its lid (I’m told that in high-end places, some of the toilets sense you and open automatically). Okay, so I might bitch about their trains vs. ours, but I think I’ll leave the crapper-envy out of this.