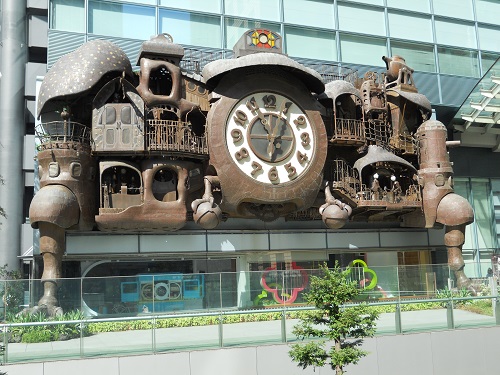 e’d picked up a Minato City tour book from the Tokyo Met building the day before and used it to fragment out some of the longer self-guided tours into short Raymond jaunts. This being the case, we trotted through waves of morning commuters to get to Shinjuku Station to head to our first looksee – the Tokyo Tower. However, for this, we needed to hop on the Oedo Line (like London’s Circle Line, it loops ‘round the city). So it goes like this – image a triangle pointing to the left. We enter on the lower right point, Shinjuko Station. Found some sort of signage for the Oedo line and walked possibly a half-mile (through a department store and down long open-air concourses. Finally got to the escalator and down to the platform. But none of the adjoining stations (which is how you figure out which way to go) are anything like the adjoining stations we were expecting. Stood there in confusion until some nice Japanese housewife (everyone is so helpful) explained it in broken English. We’d gone to the upper-right point of that triangle I’d described and were actually on another part of the Oedo loop. We’d have to backride one station west (to the left-pointing point) and then switch trains to go back through Sandjuku (directly under our first point-of-entry). This we did. Sure, we burned 45 minutes, but we got to do a lot of subway gawking.

Finally got off at the Akabanebashi stop and walked through nice urban parks with the Tokyo Tower in a comforting loom, just looking at the people and various shrines and temples. Just a nice stroll, really. Got to the base of the tower but decided not to go in – once you’d top-of-the-towned from the Met Building, this just doesn’t compare. So back to Akabanebashi for one of the most aggravating subway maneuvers any rider faces – a two-stop journey with a long platform/train change in the midpoint. We should have just walked over. 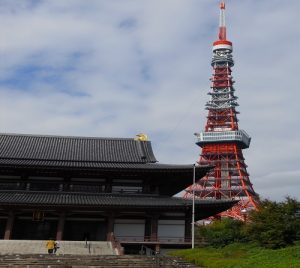 Got off at Shimbashi Station (where I saw more trains in one minute than you’ll see on American railroads in a week). Took a bit of time getting orientated (oddly, most Japanese station maps do not orientate north-top – they lay them out on a whim, it seems. So if you are standing before a wall-map with North to the South-West, holding your own map around and trying to orientate, well, nothing screams tourist louder than that). Anyway, this is the communications district – all the studios and networks are here. We strolled over to the original Shimbashi Station, a rail museum that was unexpectedly closed for that day (the nice old guy sweeping leaves up pulled out an Iphone, muttered into it, then showed us the “It so closed” translation – bowed and thanked him). But the station is there and we walked around it. They even had some of the old rail spiked down (the station had been sited in the 1880s and once it had been torn down, the rail had been reused in a refinery siding. Once the station was rebuilt, the refinery donated the century-old rail back to the museum). Still, had a nice broken conversation with a Japanese man about gauge (since this appeared to be narrow-gauge). Even with different languages, rail-heads can converse.

Then over to Nippon TV where they have a gigantic clock mounted to the outside wall, commissioned by Hayao Miyazaki (the animator of Spirited Away and Kiki’s Delivery Service, among many others). We had an hour until it “struck” (whatever that would be) so we hung around a nearby executive Taco Bell, sipping colas until it was go-time.

And what a go it was! At the hour, the clock began to whir and gong, the arms spun in different directions and the figures began to dance. Cannon turrets rotated towards up, music played and huge mechanical arms lifted to display inner treasures. It was a great five minute show! 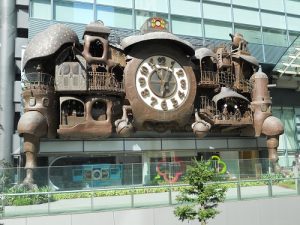 Strange lunch – stopped at a “British Pub” and ordered meals. JB’s came, along with my beer, and I told her to start (she’s a slower eater). But my food (rice and curry)? Nadda. Oddly both the waiter and waitress came out to other tables, not scanning to see how we were doing (with me in the midst of my hunger strike). Finally I went in to ask. Blushing and bowing, the waitress took my order (again) and they brought me a salad (I was so hungry, I ate that). But when my curry finally did arrive, the waiter carried off my salad bowl with my fork. So there I am, trying to figure out how to eat my long-overdue meal. Went in and asked the waitress for a fork and she bowed but no fork arrived. So to hell with it; I ate my curry with the serving spoon. And it’s too bad you don’t tip in restaurants because I wouldn’t have either way. Usually the Japanese are efficient to a fault. This time they were just faulted. Still, I was more amused that angry about the goofup.

Having survived lunch, we decided to run up the subway a few stops and visit Akihabara again, just to see more of it. And while it was fun, it wasn’t quite the amazing sight of the first time. Thought about picking up a figure as a souvenir but they want serious scratch for their crafted ones. Almost got a Ryuk demon (from DeathNote) but the cost and the likelihood of his wings surviving the trip home quashed that idea. Still, I did find an English manga copy of All You Need is Kill, which I bought and will review (it’s about an inch thick!). 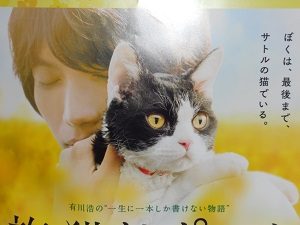 While going into the station, I actually stopped in my tracks – there was a poster with a man and a cat and I’ll be damned if I didn’t think I was looking right at Mookie, my late cat. It comes from a movie soon to be released, The Travelling Cat Chronicles, a sad and wonderful story (I now know) about a man who saves a street cat that has been hit by a car and eventually keeps it. But he is forced to find a new home for it after a few years. Okay, so watch for that one to show up in my reviews soon – it’s apparently been translated to English.

An easy ride home – 30 minutes across this large metropolitan area. In Orlando, half that distance will take twice as long (Chevy tough, indeed). Coming out of Shinjuku Station, I saw a man hunched over a bike, going through eerily-familiar motions – a Brompton! And red, just like mine!

After a nap that ran three hours, JB shook me awake for dinner. We were still pretty full (after all, my delayed meal hadn’t been that long ago). We went over to the 7-11, which my buddy Omar had told me worked well for fast and easy meals. And he was right. You can get a pretty good light dinner out of that place. Picked up some cold sandwiches, drinks, and after-dinner ice-cream cones. Watched incomprehensible Japanese TV while eating in the room that night. Called it an early evening – we’d be meeting our guide for a tour of Tokyo tomorrow and had a pretty early start time.

Travel Note: Everyone here are on phones. They don’t talk to other people on phones much (that is considered impolite (I wish more loud-mouth Yankee Cell-yellers would take note)) but they text like mad. On the train, everyone is head’s down. In restaurants, likewise. It’s strange and quiet. In ways, you feel like a ghost moving through crowds of face-illuminated zombies.