I‘ve read all sorts of books about piracy, and the one part of it that really makes me NOT want to be a pirate (outside of dangling in a cage at the end of Execution Dock, slowly rotting until the gulls are picking the eyeballs out of my sun bleached corpse) is careening.

See, while you yo-ho your way around the Caribbean, your bottom gets foul (we’re talking your ship’s hull) with long strands of weed. This could prove very disadvantageous if the Spanish Navy (not the English – can we put THAT movie misconception to rest now?) attempt pursuit.

To clean your bottom, you need to find a nice comfy bay. Then you bring your ship in really close, perhaps even using the anchor winches to drag you up the beach. And everything loose in the hulls got to come out (we’re talking cannon, cannon balls, powder kegs (careful with those), lanterns, lantern oils, bedding, personal property, every keg from the stores, the water casks, the ship’s silverware, the ship’s cat, her food, everything from the Captain’s quarters, all the surgeon’s books, everything).

Then you’ve got to establish a camp and put everything in it, except those big heavy cannons, which need to be placed in forts (which you must build) to defend your turtle-turned ship.

And all this under a tropical sun.

So get to scraping. 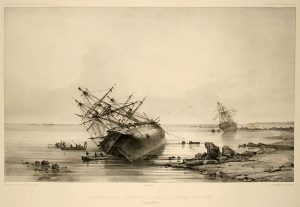 The reason I’m mentioning this is that I’ve just gone through the equivalent. My ten year old computer was just getting slow. It took minutes to bring up some files, and crashed on bigger ones (including the up and coming Solar Trader game). But really, it was dodgy and difficult and slow.

So I bought a new HP Pavilion DV6, a nice zoom-zoom computer with everything I wanted. I like HPs – got four of them in the house now. And computers are cheap now, especially with my company discount.

The thing I hate about changing computers is moving all that data. Everything I’ve loaded, played, tinkered with. Everything’s gotta be taken out of the computer, moved to the new computer, and replaced. It’s a lot like careening (in a cyber-way, of course).

The last time I did it, when I went from an old desktop to the laptop, it was pain personified. The mailing lists had to be manually reentered. My bookmarks came across, but not all my settings. And I had to repurchase Norton for my new computer. Further, several favorite games were abandoned (as I’m sure all sorts of old, broken, and useless things (and pirates, perhaps)) were abandoned on those discrete beaches.

This time, I was pleasantly surprised by how well it went. There is a tool named Mozbackup which made moving Thunderbird and Firefox a snap. As for my files, today’s big auxiliary storage devices allow most of that to be moved across using them as a bridge. I simply made a new directory and moved each folder from my old drives to it. These I’ll keep in reserve, pulling files as I need them.

I had some dread with what I’d do with Mozy, my backup service, but a little poking around found simple step-by-step procedures. I downloaded the program onto the new machine, logged in, gave my username and password, and told them I wanted this machine to replace my old machine. The backup took about twelve hours to do, which isn’t bad as my original effort took three days.

Everything’s not done. There are some games out there I think I’ve lost – I might not have the old registrations but hey, I don’t think I played them all that much anyway. And everything requires a bit of tinkering still to get it back to the way it used to be.

But now I’m sailing fast and outrunning the Dons again, which is all that matters.

And watch for my next update on another new computer, probably in 2023!

>>>I ALSO LOST ALL MY PROGRAMS FOR DOING ONLINE BOOK GENERATION, BUT THE BOOKS ARE STILL AVAILABLE. HELP ME OFFSET MY COSTS AND ENJOY A CAPITAL READ, ALL IN ONE GO! BOOKS ARE HERE!<<<