‘ve been waiting to run on the Florida East Coast since forever. Well, since two weeks ago.

Yes, that is when our club ran this line, as reported HERE. But yes, I wanted to run again. So we drove all the way to Palm Bay, met with people, I trained a new dispatcher, then my wife took me aside and told me her sister (who she was with on Wednesday) phoned her with the news she is positive with Covid.

We had this conference on the host’s front porch. Going back inside (with masks now on) we confessed our sins. Luckily the Farnhams had two spare test kits – within 20 minutes (in their kitchen) we were able to verify we were not hot. So at least the session could begin. 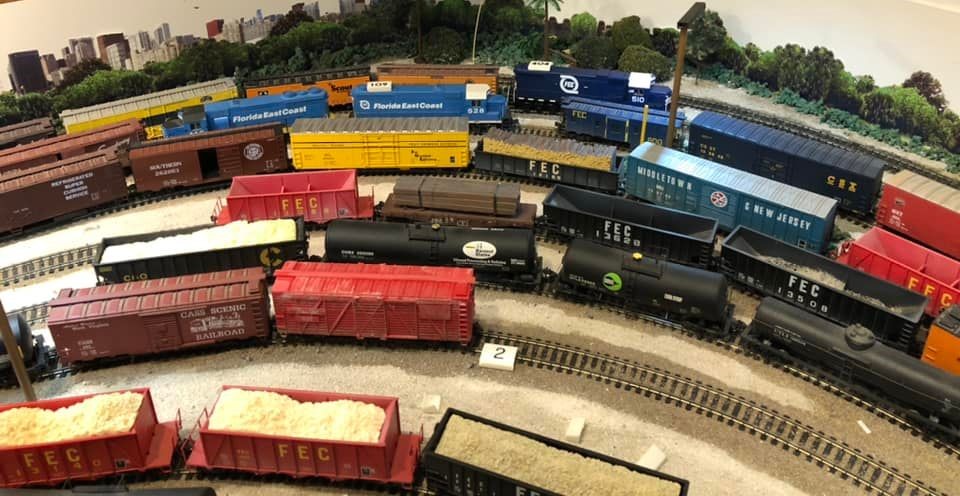 The yard, where all trains go to sleep and dream (Photo: John DV)

I was out on the road, bringing in a drag freight that had gone on the law. Club-member Kyle was running his first session on the dispatcher’s panel (and his second on the railroad). He did, in all honesty, a stellar job. He understood that if he was going to give me signals out of a main/passing siding area, he also need to give me them all the way to the next siding (since getting me halfway there is simple a half-bucket, if you know what I mean). But he moved us along and kept things rolling. I think he only sent one train out of the yard in the wrong direction, but since it was Greg (the second time in two sessions this has happened to him) it was more funny than anything else. And Greg ran to his final destination without issue (actually, I figure his switching was easier in this direction, but that’s for you to work the math on).

Me, I got dropped into the seat of 930, one of the killers (the “Titusville Turn!”). Worked my way up the line without too much problems. A little confusion on what I had to pick up at City Point, but once I got to Titusville it was pretty easy (except for the moment when I tried to run around one car with two modern long ones and ended up against the buffer with my engine trucks on the turnout – yeah, short by about seven scale feet). But I worked another way around it and it turned out fine. Got back and sat outside Cocoa Yard while Engineer Andy had to make up for earlier sins and clean out the yard of cars he’d left earlier (you don’t see a train of that length on the FEC too often).

I’d like to say I think we did well but then again, Superintendent Ken keeps records of who ran what and how many cars were miss-spotted, so we’ll see. For all I know, maybe I goofed something up and missed a bunch of cars. I’m sure he’ll tell me.

But thanks to Ken and Bev for sponsoring us, and even trusting us to not bring a mega-death plague into their house (after testing us, of course). Had a great time!