I hate that his prose is always funny, that his imagery is always startling, that his worlds are weird and his characters always cool. I hate that he can present a strange world and pull it off, and that he can actually mock (faintly) the ideals of western storytelling while he’s writing a western culture story. He just shines in this book, one of his best since Perdido Street Station, The Scar and Iron Council.

Just hates him, we do.

So, aside from all this, what is RailSea? Well, just turn off your disbelief firewalls. Just accept a planet like Dune, where there are great seas of dirt surrounded by human settlements on rocky highlands. And that stepping on that sand can get you ingested by something nasty pretty quick. Now, supposedly this planet was part of a huge galactic federation at one time, and economies were different and strange. Railroads were built. Lots and lots of railroads, competing with parallel tracks. Railroads that double, triple, and quadrupled their mainlines to handle the loads. So now the sands are covered by a shimmering sea of rails in the form of yards, switching junctions, intersections and the like.

And over these vast tangled rail networks set out trains. Some of them are salvagers, seeking ruins from the past. Some are moliers, hunting the meat and pelts of huge moles. Some are wartrains of various nations. And some are pirates.

Get where this is going? It’s rather like a sailing yarn with trains rather than ships. It’s an obvious lampoon, one so faint that the author even mocks it. Many captains have lost limbs to distinct creatures, and these creatures they pursue are called their philosophies. Captains brag about their pursuits, inquire about specific monsters, then chug out of port (with harpoons gleaming), hot on their latest lead. It’s a wonderful combination of Moby Dick, Treasure Island, Kidnapped, as well as your routine pirate novel. And as you read it (hell, as you savor it), the author stands behind you, joking, quipping, and doubling his adventure back on itself. Even given my love of sailing stories, even given my love of trains, this book stood out as a gem.

The strange thing was when I went to pick it up – Barnes&Nucklehead didn’t have it on their new arrivals or scifi shelf. So I asked. It was way across the store in young adult. Really? A book who’s first line reads…

This is the story of a bloodstained boy.

Not that I don’t think young adults would enjoy this – I think they would. But really, its better suited for adults, and best for adults who are true readers.

Check it out. Maybe you’ll end up hating it too! 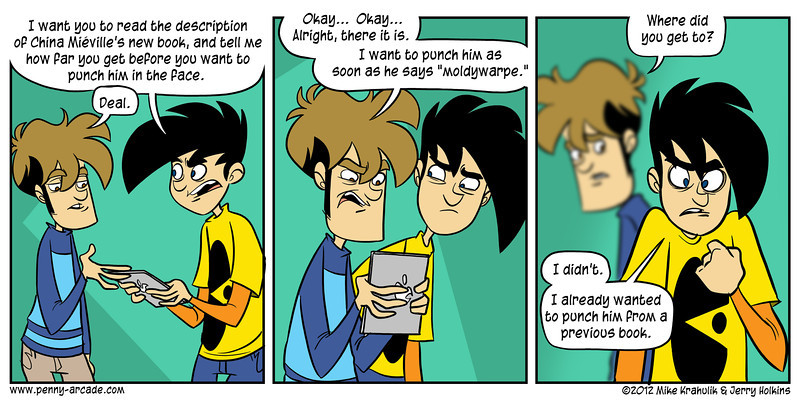