Rhine – Day Eight – How big is your bomb hole?

Rhine – Day Eight – How big is your bomb hole? 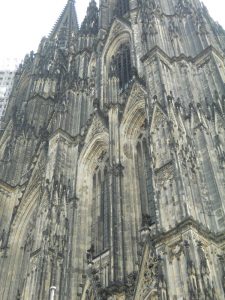 Started the day docked at Cologne. Interesting place – I’m actually sitting on the upper deck of the ship, writing this while looking over the riverfront. Anyway, we only had a half day here, so we got the usual walk through tour. The funny thing I’m noticing is that each of the guides tell us how pulverized the city center was in World War Two. That’s apparently a common theme here. And yes, I feel bad about the destruction and war is hell, but then again, I’ve seen bomb damage in London. “If you don’t want to lose your Ritz, don’t do the Blitz”, or words to that effect, I suppose.

Anyway, the lady giving our tour gave us a back-at-the-dock time of 12:30pm, which was actually a little too soon. After JB and I checked out the very nice Roman Museum of early Cologne, we had lunch at a nice café, a lunch partially stressed with me clockwatching it. We ate a little faster than we would have liked and bolted back to the ship, only to find it still here. Which is nice – I’m sure if we’d lounged through lunch, we’d have found the boat gone and ourselves way up the river without a tour ship. Happy endings, I suppose.

Now JB has joined me topside and we’re waiting for another ship to pull clear so we can cast off. It’s a bit breezy but not bad. 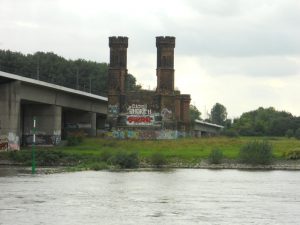 I’ll take that back. Once the ship got rolling, once the wind started washing over the bow, the other tourists vanished like, well, leaves before the storm. I hung tough topside out of pride until my teeth started to chatter. Finally I came below deck and found JB in the lounge. Hung out, had coffee and cake at four, read for a while and watched the river go by.

I’ll mention we’re just about out of Rhine. Shit.

And so tonight we sat with our friends on the final night of the trip (though we will remain on board for an additional night and probably stay in the same hotel with one couple for the next few days). Nice tight dinner (the wine flowed) and afterwards, a crew talent show (silly but honest). Then some crazy dancing. I’m still smiling.

>>>MASON’S TRIP INTO TIME WAS PERMANENT. MINE IS TEMPORARY. TO FIND OUT MORE ABOUT HIS (AND WHY HE FOUND HAPPINESS) FOLLOW THIS LINK!<<<