After a night bumping into locks, today we ended up on Amsterdam. Interesting city, of course, with all the bikes. No, I mean ALL THE BIKES. Unless you’ve been here, you have no idea how many bikes are here. Racks and racks of bikes. Every street has a bike lane. Bikes rule the city. 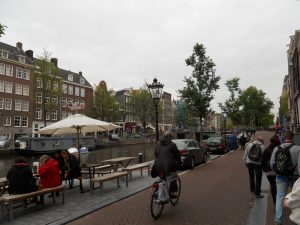 While this might seem like Nirvana for me given my interest in bicycling, it didn’t come across as a particularly friendly city. Pedestrians are threatened by cars and bikes. People toss the finger and curse each other with great abandon. So, no, I don’t think I could happily live downtown – this is a city that would eat at me.

Just as it ate at Anne Frank, given what I’ve read of her diary thus far (review to be up in few weeks). This morning, we visited the Anne Frank house. Ugh. Remember what I mentioned a day before about justification about the allied plastering of Nazi Germany? A trip through the Frank hideaway will give you a greater appreciation for the reasons we did what we did. There were some things I learned in the museum (such as a recounting by the last person to see Anne alive in the camp) that broke my heart. She was a girl so alive with hopes and dreams and desires, and all that got snuffed through an indescribably evil internal policy of an industrialized government. If you visit Amsterdam, perhaps you need to skip the windmills and the red light district and check this out. I mean, for $@%# sakes! She was only a frightened little girl. How could anyone…?

Anyway, let’s move on. In the afternoon, after a quick lunch, JB and I took a cycle ride through the Dutch wetland zones. It was one of the tours we signed up for – seeing Amsterdam like a native. JB was freaking out – she figured that she couldn’t keep up with the casual riding, even with all the riding I put her through. But it was easy – the bikes rode well (disk brakes and nice smooth shifts, though mine was (by our definition) a girl’s bike) and the route was nice. We put on helmets which made up look like tourists – fine, the natives can think whatever they want. I ride in the most statistically dangerous place for bikes anywhere – Orlando, and I use a helmet. I invite you to come to my city, ride my route and sneer at my helmet.

Anyway, off we went, north to the Central Station then across by ferry to the east bank, then out along several bike routes. Eventually we found ourselves close to the city center but amid cows and green carpets of grass. Riding bikes in situations like this is weird – it’s like you are on an Alternative Earth. We were a kilometer from the city, in open fields, on long roads that only existed for bikes. Beautiful! 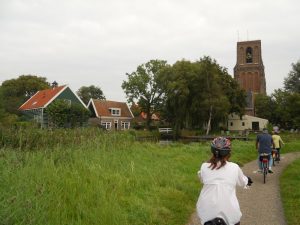 Eventually we stopped for beers in a tiny tavern – very good. Chatted with an Australian couple, then boom, off we went, riding at about 7mph along kilometers* of greenspace dikes. Soon enough we made it home. A final dinner with the Canadians and now JB is packing up her tonnage while I write this. Tomorrow we officially end our cruise and move to a shore-side hotel.

>>>NO CARS IN MASON’S TIME (330BC IN TYRE) BUT NO BIKES EITHER. FIND OUT IF THIS IS ONE OF HIS MANY CHANGES HE MAKES TO HIS NEW HOMELAND IN “EARLY RETYREMENT”<<<

* = I just realized how stupid this sentence is.