Talked my Canadian friends into taking the shore run into Speyer today. Did a cathedral tour that was pretty good (the historian guide was a bit flat, and sucked every element of soaring structure and arcing history from this tour). Then we went over to the technology museum, a place filled to the rafters with trains, planes and automobiles. 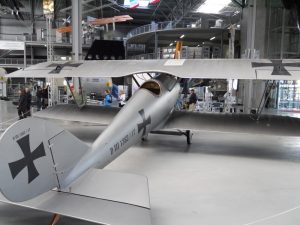 I got to see two Fokker DR1 (triplanes), one of which was a spot-on replica of the Red Baron’s plane. I also got to see a Pfalz DIII, one of the prettiest (yet lousiest) front line German fighters (appropriate, since this museum is housed in the old Pfalz plant). There were all sorts of locomotive engines, and even an old carousel (which I dropped 2 euos into so it would illuminate and run (and so I could film it for JB, who really liked it)). Funny moment when we did the walk through on U9 (a 1967 German submarine, all cramped and tight and head-bongy). Our Canadian friend went into it and never came out. While we walked away with his wife, we joked that she could tell people how she lost her husband – on a Uboat. Laughs all around until he finally popped out.

After this, we came back to the ship for lunch, and after that, we were bused over to Heidelberg (while the ship repositioned) to check out the ruins of a castle/palace jutting from the ridge over the city, and the amazing vista it afforded. I really liked it, even though it hailed briefly and was colder than crap. In the end, while waiting for the bus, JB and I sat on the bank of the Neckar River and watched the barges pass the kayaks – just a nice quiet end to a fun day.

It was our anniversary today, the whole reason we’re doing this trip. Yes, we had a great day and a nice dinner with our two Canadian couples. I’m pretty boozed right now, and it’s amazing I got anything written tonight. Well, there you go. Blogging is free, right? Quality is secondary.

>>>WHEN NOT DRUNK IN HIS STATEROOM, ROBERT PRODUCES QUALITY HISTORICAL FICTION. CHECK IT OUT HERE!<<<