Woke up in Mainz this morning with more water above the boat than below it – gray skies and driving rain. Still. JB and I went out and joined the walking tour of the old city. Saw all sorts of old, wet buildings and got the idea that this city has been pummeled by everyone from the Visigoths to the American Air Force. It’s an odd collection of the medieval, the renaissance, all the way up to post-modern. I’d like to see the city and its hills sometime when it’s not sleeting down rain. 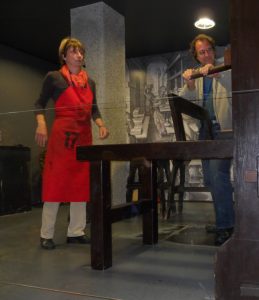 Then we visited the Gutenberg museum for one of the most interesting displays I’ve ever seen. Oddly, it was our guide Andrea (a wiry German lady) who slipped into an apron and showed us how the printing press operated. She explained how the type pieces go into the frame (and how they use an indexed rib along the top so they can visually confirm that all the characters are orientated correctly and of the same font). She even cast a type piece while we watched so we could see how it was done. And then she asked for a volunteer. Suspecting what this was for, I tossed up a hand. Turned out I got to help her work the press and “print” a document. It was fun, a real experience for a writer. Then, when it was all over, she rolled up my bible sheet and gave it to me. I’m going to have to frame it – so cool. I was still so jazzed that I bought a little replica of a printing press to keep at home.

After lunch and a little quiet time, and after the boat had run further downriver, we arrived at Rudesheim. It was still drizzly, but fine enough to go on a tour of Sigfried’s Mechanical Musical Instruments Museum. Okay, so this was a collection of automated machines, player pianos, gramophones, even chaotic music boxes. It was really a lot of fun in a steampunky sort of way. Afterwards we had a coffee tasting at the Rudesheimer Schloss. This was coffee that started with booze in a cup, lit on fire, doused with coffee and then runway-foamed with whipped cream. Strange but really good. Afterwards, JB and I with our two Canadian couples wandered the town, drinking this and looking at that. Finally we returned to the ship only to find that dinner was pretty lame. So back into town, for some high-priced (but stunningly good) German food (JB and I even found an open ice cream shop afterwards). Then back to the ship, where we hung out in the lounge (and even did a little dancing) until beddy-bye time.

Yes, quite the night. Now we look north to the picturesque gorge and pray for sunshine.

>>>WHEN I SAW THE CRAZY MECHANISMS IN THE MUSIC MUSEUM, I HAD TO THINK OF MY CHARACTER FROM “EARLY RETYREMENT” AND THE THINGS HE DID. CHECK IT OUT<<<