Strasbourg was our first full-day port (or first full day aboard, or whatever). Interesting place. After a night of bumping and thumping (but not too badly) through locks, dawn found us docked along an industrial area south of town. However, what a nice place (better, I’d suspect, than civic-prided blight of New Jersey). A line of railway goods wagons stood in a neatly mown and tree-lined railyard, with swans swanning (sorry, but that’s exactly what they were doing) about between ship and shore. On a nearby road and sweeping bridge, bicyclists whizzed past with German efficiency and French pride. Unlike the US, nobody took a shot at our ship.

After breakfast, we toured the city canals via a small glass-domed boat. It was a bit on the cool, rainy side, but still we saw many wonderful buildings and interesting sights in this gamepiece of a city, swapped between Germany and France over the last one hundred years. When we went through a set of locks, we hydro-jaded travelers didn’t bat as much as an eye. 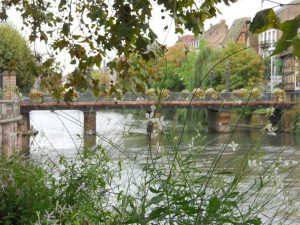 After this, we debarked (debarged?) and walked the grounds for a bit. There was a beautiful cathedral that made one’s heart stop to look up its face (140 meters) with a steampunky clock inside with moving figures that rang bells and flipped hourglasses. Then we were given time to walk about and look into shops – alas, not much was really open, given that the weekend shops are generally closed Mondays and it was rainy and pretty much out of season. Still, I bought some fudge of Tootsie Roll consistency. And back we trudged through the passing showers, snapping careful shots from beneath our umbrella.

That afternoon, our small circle of Canadian friends we’ve hooked onto had originally thought about returning to town for a bit more shopping, but after a small easy lunch and a quiet communal chat, our beds looked better and better. As my sleep cycles are still off, this was a welcome respite – a chance to recharge my batteries (camera, computer, and biological) and brace myself for the journey to come.

It should be noted that tonight was formal night. Showed up with a tie (one of the few), with JB dapper. Ate dinner with our cruise buddies, made plans to go to a technology museum tomorrow, then retired upstairs to watch a local French singer (and her accompanying organist) grind through famous French music. Silly but fun in a boozy sort of way (how much did I drink at dinner?). Afterwards, JB and I took a quick walk around the deck – nice but she was as skittish as a colt. What, did she think she was going into the river? We’re in a lock now as I write this. Who knows what tomorrow holds?

>>>MASON HAD NO IDEA OF HIS PAST IN “EARLY RETYREMENT”. SOMEWHAT TIPSY, MY FUTURE IS A DREAM. NEXT EDITION, WE SEE WHAT FOLLOWS. BOOKS HERE!!!<<<