The morning of debarkation. We’ve put the suitcases out in the hall with ribbons to show our transfer to the hotel. I’m walking down the hall, toting my carryon, calling out to an Aussie I knew. And JB, somewhere behind me and following, trips on some sheets left in the halls by the cleaners and faceplants. Crash!

At first I was pretty angry – how embarrassing. Everyone’s standing around cooing and she can’t seem to tell where she hurts. I thought she was just shaken. But no, she can’t move her left arm.

I’ll give them this – Avalon (the tour operator) had us in a taxi and off to the hospital in short order. Compassion for the injured or terror of liability? Who knows. We were dropped at the hospital (very quiet on a Sunday morning, but you could see vomit all over the doorstep from Saturday night). She was seen pretty quick, an X-ray was shot and the news came back – she’d actually sheared the protruding bone on her shoulder. Yes, she’d broken her damn arm.

I know her emotions were pain. Mine were anger, shock, frustration, guilt, you name it. I’m going to say (and get catcalls from the audience) that I was really pissed that there were things I wanted to do that day. Dammit. Okay, so say it. Boooo, Robert!

And here’s the last thing I’ll say bad about Avalon – they didn’t seem to know how to handle this. Back at the hotel, I sat with their representative and tried to get to the UNITED AIRLINES site- we couldn’t pull up my flight info. So he came up with the great idea for me to head out to the airport and personally change the flight at the desk. So off I went, on a wild (and dumb) goose chase.

Let me point out right now that the Above and Beyond award goes to our boatside friends, Joe and Joyce Gill, who sat with JB in the hotel lobby while I was on my airport jaunt. Our rooms weren’t ready and she was drugged, sitting with our luggage, and yet our friends camped out with her (I’m sure that they also had plans for Amsterdam that day). But they stayed and had lunch with us afterwards (when JB’s pills and my adrenalin dropped out and we hit the wall). But thanks, folks, for your compassion and assistance in our dire situation.

But I’m ahead of myself – lunch with the Gills was after my snipe hunt: At the UNITED AIRLINES’  desk I got a firm “NO”; they couldn’t change the ticket because Avalon had booked it. So I caught the bus back – two hours wasted.

Now it was getting into the afternoon. The cruise director, Ninki, called and suggested we work it through the trip insurance people, TRAVEL INSURED INTL (you know what the bold underline signifies). After a lot of confused international dialing I got them. But they wanted medical proof that her arm was broken, so more hours were spent while they located a doctor and sent him to our hotel. And we waited. And waited. Finally he showed up with one of the bellhops, who would serve as a translator (he was a nice old guy, very 1950s-ish, way out of place with Modern Bustling Amsterdam). Then there was pure pandemonium in the room – the Dutch doctor quizzing my wife through the bellhop, and me trying to call TRAVEL INSURED INTL to find out where the paperwork was. And that’s when the guy from the front desk finally showed up to show us how the remote worked. And Ninki called again. Crazy! 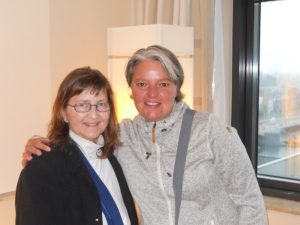 Eventually things got settled. I went down and faxed the stuff to the travel advisers (clocks running, guys – it’s been four hours). JB was feeling better – she could move her arm a bit more, and it didn’t hurt too much in the sling. And then Ninki showed up – how nice of her to do so (strange to see her in civilian life). She was very pleasant and caring – and listened when I mentioned they might consider having better contingency planning. So Avalon, we might again book with you, if only because Ninki put in the extra effort.

So after this crazy day, how did we spend our evening in this city of sex, drugs and bicycles? We went to a Subway (not a cool European transportation system, no, but the sandwich shop). Now JB is taking a bath – she’s flexible enough for that. And I’m sitting here reflecting on my day of Dutch hospitals, a whirlwind airport tour, country doctors and two six inch (or 15 centimeter?) sandwiches.

I can’t wait until I get back to work and things settle down.

Just waiting for that phone to ring…

>>>IF YOU FEEL PITY FOR ME FROM MY MISERABLE DAY, BUY A BOOK. RIGHT HERE<<<