Did we ever kick off this unlucky day in style.

It started on the 12th, roughly an hour after my last posting. We’re sitting sweet and pretty on the plane in Orlando, the plane pushes back, and that’s it. We sit. It’s an ATC hold on planes into New Jersey International because of weather.

Finally (after an hour and more of excruciating delay) we’re off the ground and making back time. Good; we’ll be in to Jersey by 8:30pm, plenty of time for our 9:55 departure to Zurich. Wheels hit wet pavement at 8:30pm on the dot, we turn off the runway and taxi clear. And wait. And wait. Because of the weather delays, the airport is bollixed up.

Did I say this was United AIRLINES? I didn’t? Let me correct that. UNITED AIRLINES (criminal organizations need a shameful bold/underline treatment). At 8:50, Captain Nubbins called back and said, okay, everything’s clear, we’re taxying in. And we did. For 100 feet. And then we waited some more. Waited and waited until 9:30. And now we’re damn tight on time.

Of course, there is the usual hassle of everyone pulling steamer trunks out of the overheads – and I’ll blame UNITED AIRLINES for this – enforce your carryon rules, you twerps. You let all these asshats bring two huge suitcases on, then there is no bin space for us later rows, and these same self-centered prigs then slow down the exit process, each of them grunting two sixty pound trunks from the bins.

Down the ramp and there is the agent, a stumblepuck if I ever saw one, just some guy holding down a late shift and in over his head. I show him my boarding pass – it’s to another UNITED AIRLINES plane, for Christsakes! And he doesn’t know what gate! “Uh… go to Concourse B… I think….” 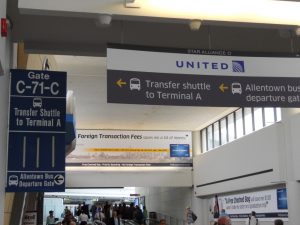 I ask (sharply) which way is it to B and he tells me go left and follow the signs to the tram. So off we go, run run run, down concourse C until… we run out of concourse. Backtracking (poor JB, doggedly jogging behind me, and me with all the carryons) we finally find someone who shows me where the tram is, which just departed, an unmarked portal to mythical concourse B.

After a long wait (9:45!) the tram comes. We get on. And off we go, to concourse A. I’m thinking that perhaps they know they need to go to B (I mean, shit’s sake, it’s between A and C, right?). But no, suddenly I look out and we’re back in C. “Are we going to B?” I shrill. “Ho yes,” the Jamaican/Hispanic/Martian/Union bus driver tells me. “Berry next stop.”

(Since this writing, the New Jersey Transit Authority responded to a complaint letter concerning the busses. They don’t operate them. That would be… yes? UNITED AIRLINES!)

So finally we get to the berry next stop (snail’s pace) with another desperate UNITED AIRLINES customer who is also trying to evacuate Jersey for Switzerland, and I give the bags to Jane and run run run down concourse B to hold the plane, to get there and see the gate and the staff and ZURICH on the board, and the nice UNITED AIRLINES employee looks up, doesn’t smile, and barks, “Closed.” “But the plane…?” “Gone.”

We’ll cut some of the following stuff short here, the horrible trams (two of them!) to P4 (where hotel shuttles were), the horrible phone bank for calling them, and the fact that every hotel off the airport was filled to capacity with abandoned passengers (most of them likely UNITED AIRLINES  victims). Nowhere to overnight but a florescent, echoy and poorly signed airport. Now I know how Joseph felt – no room in the inn.

I took a moment and thought it through – called one of the hotels, got the “We’re booked solid” grunt from the bellhop, and told him to put me through to the chain’s reservation line. From there, I had the booking agent scan their properties for anything open. We found a last overlooked room eleven miles from the airport, which is (I now know) a $50 cab ride. 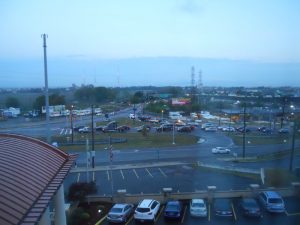 And so now, at the time of this writing, we’re back here in the airport, Day One of our dream vacation, in Newark. The garden state? Haven’t seen one. Just a lot of litter and rust and dead industry; it looks like Mordor a month after the ring got dunked, really.

But we’re here. And we won’t miss the plane this time. Of course, it’s me against the world (or at least UNITED AIRLINES ).

>>>WHEN MY HERO FELL THROUGH TIME, IT WAS INSTATANIOUS. HE CERTAINLY WASN’T FLYING UNITED AIRLINES<<<