We went up on deck as the crew cast off, the ship pivoting neatly in the channel and easing into the current. It was cold and windy (i.e. even more cold) with a wet spitty rain lashing at us. But we were all excited – the weather was better than yesterday (i.e. we could see the Rudesheim Mountains) and we were looking forward to the show – the Rhine River Gorge! 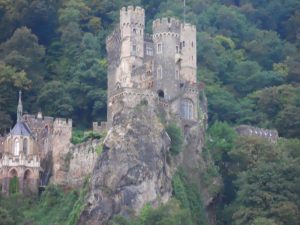 And what a show. The mountains slowly rose around us, squeezing the Rhine into a ship-clogged channel. Along both banks, two double-ribbons of railroad main line, with trains rushing past in an endless precession. And on every craggy ridge, another pepperbox castle. 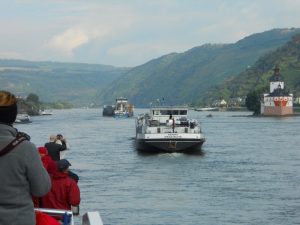 I was really stunned by this. I shot pictures, walking from port to starboard, bow to stern, snap snap snap. Eventually JB got too cold and went below. The Canadians followed. As time progressed, the river became lazier, the banks broader (though wineries climbed the broad faced hills). But the sun heated the valley. I wasn’t shooting as many shots now, just a set of curiosities and mood images. Now that I had the topside deck pretty much to myself, I strolled the promenade, just enjoying the wild beauty.

Eventually we docked in Koblenz, the middle of three ships (docking space is limited here, it seems). We went into town for a walk through with a guide, learning all sorts of odd little things. When we were released we went for a longer loop with the Canadians. Sat in a café on the edge of the tourist zone and had some milk shakes (a little more watery than stateside). Saw a model railroad shop but everyone was a little too eager to continue for any sort of a browse – I rather regret that, but that’s life. So now we’re back at the ship, resting up before dinner (JB is resting. I’m typing).

Slap on your aftershave. Tomorrow is Cologne!

>>>MENTIONED TO SOMEONE DECKSIDE THAT I WAS A WRITER AND HE DIDN’T INQUIRE FURTHER. IF YOU MIGHT BE CURIOUS, CLICK HERE AND CHECK OUT MY BOOKS!!!<<<