Sometimes so much happens that you need to put in a side chapter to explain other details of the tour. A good writer shouldn’t have to do that, and can carry it in a sentence or two. So here’s my interlude.

Thursday night was interesting. After a long dinner created by a local chef (I had some sort of beef patty things that I ended up literally licking the plate over), we retired to the lounge. There, a local trio of musicians (two guitarists and a violinist) played tunes classical and otherwise for us. I’ll say they were good, since I drowsily listened to them with a soppy smile on my face yet didn’t fall asleep, no mean feat given the gallons of wine aboard.

As the ship’s director had announced we’d be going under the Remagen Bridge (where the allies got their foothold over the Rhine, and which collapsed after ten days of desperate attempts by the Nazis to drop it). Canadian Joe said he’d be interested in going up. So the director rang us up at 12:10am and we left our warm beds to troop upstairs and meet with another three other history buffs/masochists on the bow.

It was dizzily and dark and cold, just a perfect night to appreciate your cabin. We droned down the river between dark banks, the Rhine trains rattling past in the dark. Then the ship’s spotlight flashed out, searching for the block tower, all that’s left of the structure. We looked and looked and finally saw it – I’d already set my camera to “nighttime landscape” shutter speed (since they didn’t have a “hopeless rainy rolling driveby at 30 mph” shutter speed. I managed to get a ghostly (i.e. bad) image of the thing.

A note of our companions. As hinted here and there, we’ve struck up a casual friendship with two Canadian couples. They are very nice (and smile charmingly when I get into my political/social rants (not hard considering America just suffered another manic-with-a-gun moment)). 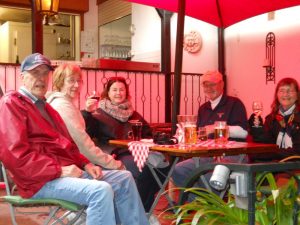 So we have Ken, an older fellow with a wry sense of humor and a no-nonsense attitude, the sort of guy who will cuss up a storm yet give you a slap with his hat when you forget yours inside a church.

And his wife Marilyn, a very sweet lady with the saddest little smile, who can hold her own with me when it comes to tossing did-you-read titles. I’ll be reading and reviewing some of her recommendations in the coming weeks.

Then the other couple – my buddy Joe, a salt-n-peppery fellow. He’s the nicest guy, I respect him in every way, and see much of myself in him (and since I drive him nuts, he’ll recognize the insult for what it is). Seriously, Joe was up on the bow with us for the Remagen Bridge episode, looking like a drowned river elf in his hoodie jacket.

And then Joyce his wife, a very nice lady who grew up on a farm and has a pragmatic sense of humor (after all, she married Joe). But I like her – she’s the one who got me up on the dance floor the other night where we acted like dancing fools and had a great time!

So thanks for traveling with us, guys! We had a great time sharing our journey with you.

And now, on with the travelog!

>>>THIS RECOUNTING IS ‘TOURISTY’. AND SINCE IT IS, YOU NEED A GIFT SHOP. FOLLOW THIS LINK TO MY BOOKS. PICK UP A SOUVENIR. HELL, MY eBOOK IS CHEAPER THAN SOME OF THESE POSTCARDS!!<<<