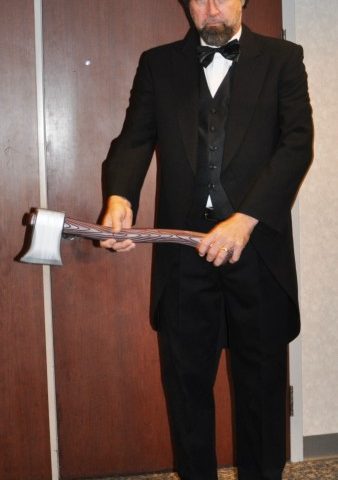 Months in the marking…

Back around March or April, my admin told me (following my stint as a carnie barker at a work function) that she knew what I should be in our Halloween work party – Abe Lincoln, Vampire Slayer.

The idea had appeal.

It took some doing. First, JB and I went to see that silly movie, just to see what it was about. Then I read a book on Lincoln. Then, a month ago, I started letting my beard grow out so I’d have something to work with. And then the final weeks – renting a tailed tux and vest, finding a toy ax, then cutting off my mustache (sob!) and getting my beard dyed a darker brown.

Last night was a rush to get ready. First I tried to make a mole out of some sort of flesh-paste stuff – it made my skin burn and wouldn’t stick. Then I tried gluing a witches’ mole (nipping into the costume shop before they closed at 10pm). No good – looked horrible. With my skin irritated, I said screw it – I’d just go in my natural self.

I also worked at jutting my chin down to elongate my face, and walking low and slow (actually, Lincoln had a higher nasal voice but I couldn’t make it work).

Went to work today, slipped into the bathroom and set myself up. Looking good, Abe, looking fine! Then I strolled around the building, greeting people and asking for vampires. The admin helped, drawing a neat mole in place with eyeliner. Realized that I’d need the glasses case from my car (so I could store my glasses when “performing”). There was nothing for it but to walk out to the garage, against the flow of inbound workers. What else could I do? People would be coming in and look up and see me and their eyes would go round. I’d just hold that long Lincoln stride and say “Good morning, Ma’am” and “Good day, Sir” as I went. Everyone got a laugh at it.

It was nice that in the town hall, I actually won first prize – got a little trophy and everything. It’s sitting on the shelf over my desk, along with my plastic ax and last year’s “Occupy Maitland Summit” sign (from this costume).

Oh, and when I had to get up and accept my trophy, I could only smile in that grim Abe smile and say, “This will be the only time I dress up as a Republican”. Big laugh for that.

>>>IT’S NOT ABOUT ABE, AND IT’S GOT NO VAMPIRES. BUT “EARLY RETYREMENT” HAS PERSIANS, SIEGES, TRIREMES, AND FUN GALORE! HAVE A LOOK!<<<