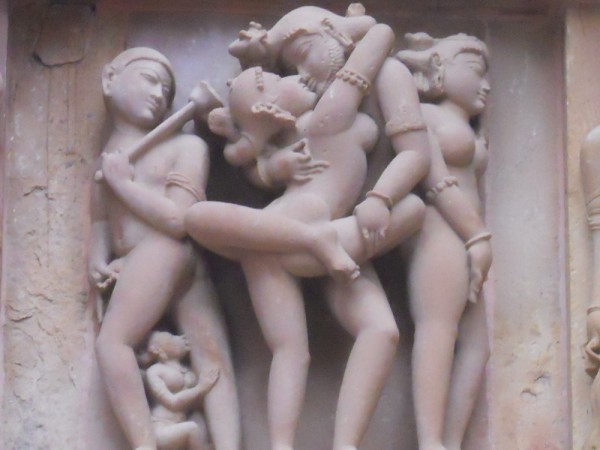 kay, so, Khajuraho Temple – looks like those temples out of the Jungle Book (yeah, already made that comparison). But that’s where the G-rating ends. 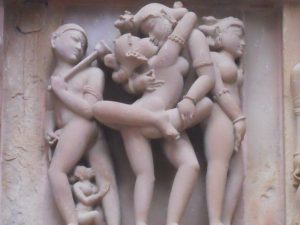 Whoever the natives were, they were very open-minded. Their temples showed all manner of court life (unclothed court life) and all manner of sexual configurations (69, three-somes, voyeurism, bestiality).  So yeah, I got a lot of pictures. Really, there is something (as an occasional writer of erotica) that these stone-masons of 1000AD captured, the saucy cant of a woman’s hip, her come-hither expression, all that. And did they ever catch it. Honestly, much of it is repeats of earlier scenes in the other complex; one woman adjusts her henna markings (and twists back a leg so erotically) yet you see the same moment captured over and over (woman with a thorn in her foot, woman needing help with an ankle bangle) that you rather get the idea. Still, some moments of raw sexuality there. Worth a look.

Then a rush to the airport to pick up a flight to Varanasi. No problems with the flight – oh, it was rinky-dink with the banana-republic security, the rolling boarding ramps, all that, but a 30 minute plane ride tops a 12 hour bus ride.

This afternoon, we drove over to the Ganges for our special tour of the river by sunset. It was a bit of a problem that the cars had to drop us twenty minutes’ walk away. This doesn’t sound like much, but Varanasi is an Indian city – you must see traffic to believe it. We pushed along a flood of humanity, stepping over deformed beggers, dodging hawkers, shouldering along with natives, all to the singing horns of the traffic. Pushed our way down to the river bank – a hazy purple in the late afternoon glow, the ancient steps packed with worshipers and watchers. Picked up a couple of flowers from a boy, a cup, flowers and a candle in each – these were for sending wishes along the Ganges.

Okay, so two swarthy river-rats loaded us into their old wooden boat draped with orange flowers, backing us under long ore/poles into the main body of the slow moving river. We eased north along the bank, threading past boats out to see the night’s happenings. Further along, pyres were bursting against the evening gloom, one, two, three… five – even more. Cremations were taking place all along one section of the bank. Kites fought against a half-mooned evening sky, bats fluttered, mosquitos hummed, the riverboys calling out to each other, clearing down port and starboard. 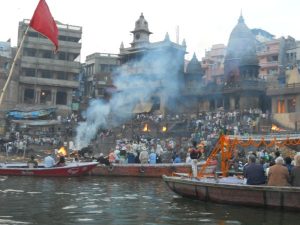 We held station off the cremations, watching new bodies being brought down, new pyres flaming high. Tiny candles were lit in their cups and set off with a wish. Got mine and JBs lit and we launched them together, watching them flow north, riding into the darkness where all dreams go. A defeated kite fluttered down with a tiny splash further out. Boats rode easy, not two alike.

We poled our way back up to the launching point, only to find a line of Brahmans performing some religious line dance on a lit stage, all the river’s vessels pressing close to watch. The alien music floated over the waters. Tea-boys walked from boat to boat, selling steaming drink by the cup. I looked over my shoulder and saw a female Indian boat girl facing away, tending to an oar. She turned to reveal that she was in advanced pregnancy. I realized that at that moment I was looking at true India.

Eventually we got ashore – then came the crazy walk back, the scooters, auto rickshaws and cars flooding past uncaring pedestrians. Once again we had to push through intersections so clogged with honking cars that one had to turn sideways and slide between scooters, rubbing against the drivers. We got to the curbing – the woman before me (one from our tour) stopped dead. Just off her line-of-march, a shadowy patch of muddy ground, a dead dog lying there. There we stood, traffic chaosing past, and she’s locked up over the dog. “Keep moving,” I said firmly and gave her a gentle push. I didn’t want to lose sight of the guide. That would be death. I’d never get home.

But I did, following a crazy drive home, including a dust-roostering shortcut through a slum. Finally we made it. Retired to the hotel restaurant for Fish and Chips, too much beer, then back to the room. As I write this, fireworks are banging from a nearby Indian wedding and car horns ring in the night.

We’re going to see another Ganges tomorrow, hopefully a calmer version, when the sun rises.