India – Day One – Travel and travel and more travel

India – Day One – Travel and travel and more travel

Action Photo: JB readies herself for flight in Paris

couldn’t sleep last night – too much in my head, what with three airlines to navigate, a 4am wakeup, a ride to the airport, guilt over the cat, and the endless milling dread of imagining things that might go wrong. Which is what I do, I suppose.

Anyway, the limo guy was a touch early and he took the abandoned 436 in, a straight shot in twilight Tuesday. Got to the airport and found out that, no, Jet Blue does not share luggage routes with Delta so we’d have to do it ourselves (which wasn’t what they told me on the phone). Thank goodness we left a lot of time at JFK.

Anyway, the GEOS jump-the-security-queue cards worked like a dream. We were at our gate nice and early. Had breakfast. Caught a nap. The jet was ready on time and with a tail wind so we broad-reached north, getting into JFK early. Got our bags, lugged them about a mile to the tram which took us to another terminal (my shoulder bag, with the CPAT unit, my tinytop, a bunch of books, all that crap, is getting heavier and heavier). And that’s where the fun started.

The tour group fat-fingered JB’s name so it doesn’t quite match her passport (JANEB rather than JANE_B) which flunked the autoscanner. So we had to go see the out-of-work-comedy-club Delta security guy. He looked at our passports and paperwork, and thrice did that “Oh my. Hmmmm. I’ve never seen such a thing.” And he told us how the hardest part of is job was telling people he couldn’t clear them through (even though he hadn’t cleared us yet and we were dangling). By the time he’d had his fun, I was sweating. But no, everything was correct regardless of his false flags and trip-cancellation-innuendoes. Ha ha. Very funny. Ho ho. It ‘tis to laugh. Finally we got a nice sitdown lunch at a fake pub, then went off for the long wait at the gate for my sister (who is traveling with us). Hopefully, she can get past the bridge of death!

It’s 9:20am. Pat made it – her flight was delayed for a family emergency and a prolonged gate wait. But she made it and we got on our trans-Atlantic leg. By fantastic luck, the flight was only half-full so we could all find four-seat rows to stretch out in. Very heavy turbulence at mid-point, but since I was trying to sleep anyway (had the sleep mask and earplugs on) it wasn’t too bad – just like some clown shaking the bed. Actually fell asleep in a bad patch.

So now we’re in Paris in a calm morning, getting ready to head out on the final leg. In eight hours we’ll be in New Delhi, it will be closing on midnight, and my body will be screwed up again. 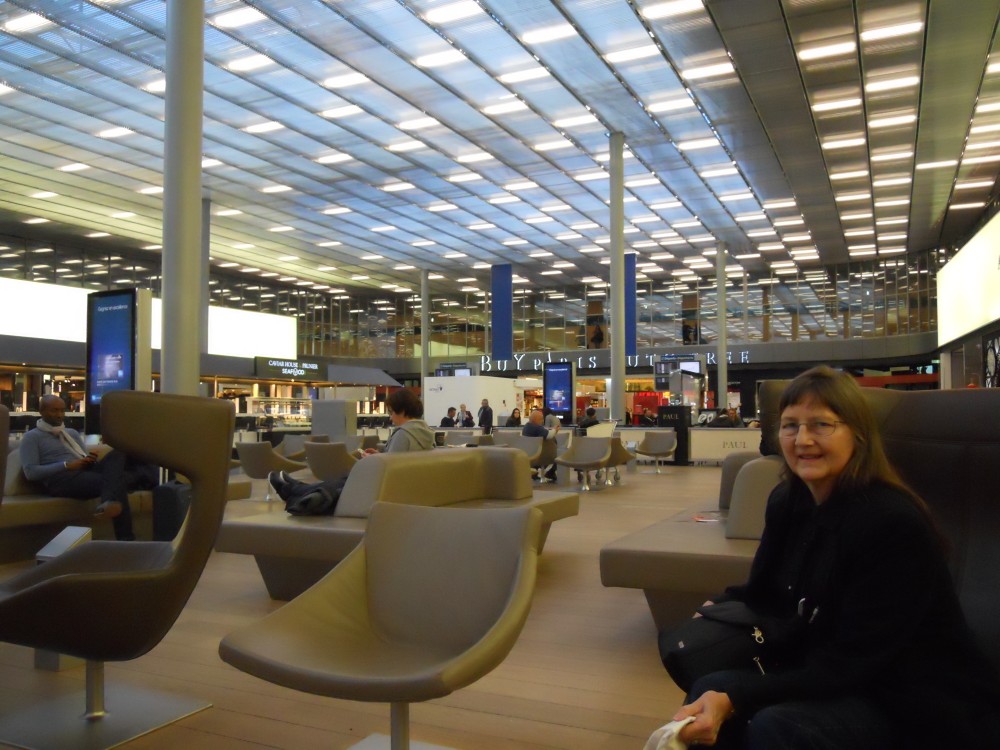 Action Photo: JB readies herself for flight in Paris