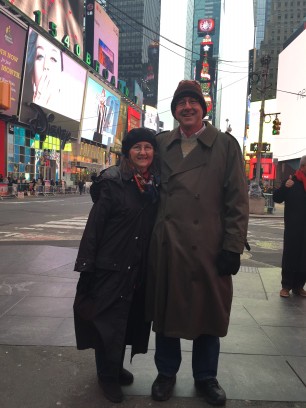 ur latest travels – my mom decided to sponsor the entire family for a trip to New York City, up to Christmas Eve. And that’s good – I haven’t been there since I was seven. And it would be a good test of JB’s resilience – given her injury and the complications that came from it.

Okay, so you gotta understand – this was one packed day. Up at 3am, on the road for the airport by 4am, in the air by 6am, and in New York shortly after 8am. Interesting to see this city (this ‘living reef’ as HG Wells called London) on the drive in. Traffic in the city was one step short from death-defying – glad me and Eleanor (my mini) weren’t out in these streets.

We started the day on a kinda confused note – the apartment we are renting didn’t come open until 3pm but we were in the city by 9am. Dropped our luggage at a luggage storage facility (there seems to be a thriving industry for this that I never expected). After that, we walked to Broadway.

Interesting place, this city. We walked around Times Square for a bit, then found a breakfast joint; tall ceilings, mirrored walls, vast windows, really nice. Had a good omelet. When we got out on the street, I realized that not pulling the scarf out of my luggage was a dumb mistake – it was cold and getting colder. Eventually JB and I stopped on a small outdoor market and bought some overpriced scarves – I don’t think we would have made it through the day without them.

Traipsed around Rockefeller Square, saw the tree and the ice skaters. The crowds. It was like Judgement Day on the streets, just pushing through the masses. But nobody was rude (not as I’d been led to believe) – everyone got around everyone else with a minimum of fuss. It was like watching one of those salmon farms with all the fish wiggling around each other. One or two people who bumped me apologized. And yes, I immediately felt for my wallet.

Eventually we got to see the Rockettes’ Christmas show. It wasn’t high on my list but after it started, I was nothing short of amazed. It was just brilliant all the way through. Massive Santa line dances. A train and a bus onstage. And a reenactment of the Nativity, including three camels and a half-dozen well-behaved sheep. They even had a bit where airship drones flew about. Just stunning. It was like Cirques Du Soliel on steroids.

Finally, when this was all over, we got to get into the rooms. Once that was done, a little down-time (very little) before hitting the streets again, this time with Mom, Pat, JB and I going to a play (“Constellations” – just opened). The walk over was brisk – Sunday night at 6:30pm and Orlando’s gone to sleep but the big apple keeps churning. Millions of taxies, bike delivery guys, and the occasional FUV (why would you drive one of them in this city?). Also saw a hint of snow in the air – been years since I’d seen that.

The play was great (with my nice slacks, while shirt and tie, I was overdressed – I live in the wrong era). On the way home, we stopped in a hole-in-the-wall pizza joint (still going strong with walk-in business at 9pm). Good food, then home to relax, to blog, to pull out a novel and take it easy.

>>>AFTER MASON CAME TO ANCIENT TYRE, THAT CITY STARTED TO BECOME ITS OWN BIG APPLE. SEE WHAT I MEAN IN “EARLY RETYREMENT”, FOR SALE HERE!!!<<<