The Jacksonville lift bridge is rattling from a constant stream of rail traffic, so much so that the draw bridge has been down for two days straight. More amazing – if you looked into the cabs of the huge Genesis, Dash-9s and Big Boys, you’d find a 10 year old boy or girl at the throttle and a grinning older conductor sitting back in the brakeman seat, enjoying the ride.

It’s our second performance for the new layout at Deland, a great showplace for our new techniques and efforts. Since last time, we expanded scenery 12 feet (the urban Jacksonville section, complete with the Acosta bridge, Times Union building and terminal/convention center. We set the entire 40 feet of modules in 30 minutes (with a small crew), something that used to take us all day. And outside of a small glitch (a hardware failure) at the start that we wired around, we ran flawlessly the entire weekend.

For a small donation, we let the kids run trains. Really, they all had a blast, carefully wending their way back and forth through downtown Jacksonville, following the signals and finding out how to really run trains (rather than just cracking open a throttle and running). I even taught one young kid named Striker proper horn use – when his signal would go green, he’d diligently toot twice. And each one got a hand-signed certificate, denoting them as certified to run in the Jacksonville Division. Just great.

The layout showed it’s worth in the breakdown – it only took a small party 30 casual minutes to load and roll. Sure beats an hour or more of box assembly and heavy lifting we used to go through. All to the good, and the club can use that $300 it made from show fee, magazine sales and donations.

Oh, and I sold five copies of Early ReTyrement at the club table. 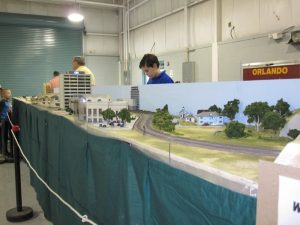