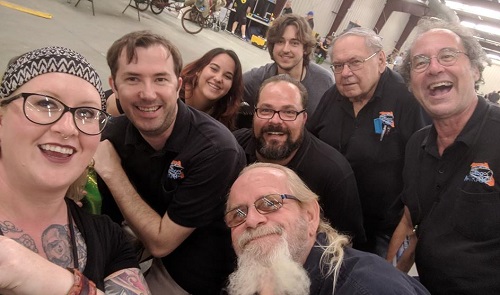 The survivers - Sparky is weeping in his truck

hen the scenery guy put small sections of clear plastic over some of the more delicate scenery, I thought it was excessive. After Makers Faire (a showcase for all sorts of builders, dreamers and geeks) I think six-foot sheets of bullet proof glass would have been more appropriate.

First off, Friday night, we had three people building the layout (out of the half-dozen or more who’d agreed to it). Finally two more people came in and we were able to finish up, but that was a lot of work for the reduced squad.

Saturday was hell-day. We were mobbed – all day, throngs of coked-up over-stimulated brats and their oblivious, distracted step-parents treating our layout as either a Discovery Zone touch-space or a bar (people leaning both-elbowed on the layout!). And, of course, again more than half the club members committed and signed to coming didn’t. This left us with three guys running non-stop for seven hours and a couple of backups helping (including my dear wife, who came out with snacks). But yes, we were fending off the hyperactive cakerolls with boathooks.

The final day we were better staffed (still missing a few). And while the crowds were a little thinner, the damage seemed greater. We’ve got a lot of fixing to do.

I’m not sure if we’re getting anything out of this. We might have picked up another member (Mike was dealing with the guy). But otherwise, it’s a lot of effort on the shoulders of a few. And really, if I want to deal with waves of screaming children, let’s just set up the layout at the exit of some thrill ride or maybe the ball pit at Chuck-E-Cheese. And if someone’s going to suggest this for next year, that someone better be on the floor both days, beating back the fingers with a throttle. Money where your mouth is, and all that.

The only good that came out of it was the takedown. Frank marshalled the forces and we struck the layout in a clean and concerted effort. And we took our time – 20 minutes. In the end, while the racks were being rolled into the truck I passed on guy who was watching, who said to his friend, “I like watching the model railroaders take down their layout. They should do that as their show.”

The survivers – Sparky is weeping in his truck