‘m in my hard wooden chair in a West Virginia Northern caboose, my coffee sloshing about my green company cup as I ride the rough rails down from Clifton Forge to Harris, a line of WVN green boxes banging along. I hear the head-end throw an uneasy four-note whistle as we reach the engine house grade crossing just outside of town. The engineer in the iron seat up front is a newbie. But it’s not what you would expect, not some gnarled tobacco-spitting local boy made good, no. It’s my wife.

JB came along with me to run on the WVN this time, under the iron-clad promise that she’d crew with me the entire time (since she didn’t know the line, the methods, the operations or even the hosts, and she’s not particularly good with the unknown). Our hosts the Komars kindly granted us this condition (it mean less capacity in the room without any increase in productivity) and so the stage was set.

I figured JB would operate like any other newbie. Given that the Komars’ throttles are not just spin-n-go, but accelerate-and-ease-on-brakes (if you don’t like momentum, don’t come – another operating slot for me). So all newbies are very gentle until they realize they aren’t getting anywhere quickly. For JB, it took about half our work at Harris (where we enter, run back to the east end, classify, turn the engine on the table, grab the outbounds and vamoose) to get over throttle-shyness. She didn’t bang the cars, no. But she did get the acceleration down and figured braking distances. She even got the engine onto the table neatly. So yes, as we discovered years back on a real GP-7, she has a better throttle-hand than I do.

We’d also brought along three club members (specially invited from Orlando N-Trak by the Komars) to operate. They all did a super job (Gail thanked me later for bringing competent operators). And that’s why operations at the club work so well – we practice there and are skillful boomers everywhere else (Wilkes noted that our guys knew the warrant system backwards and forwards). So yes, it looks like you guys will be in the crew calls going forward. 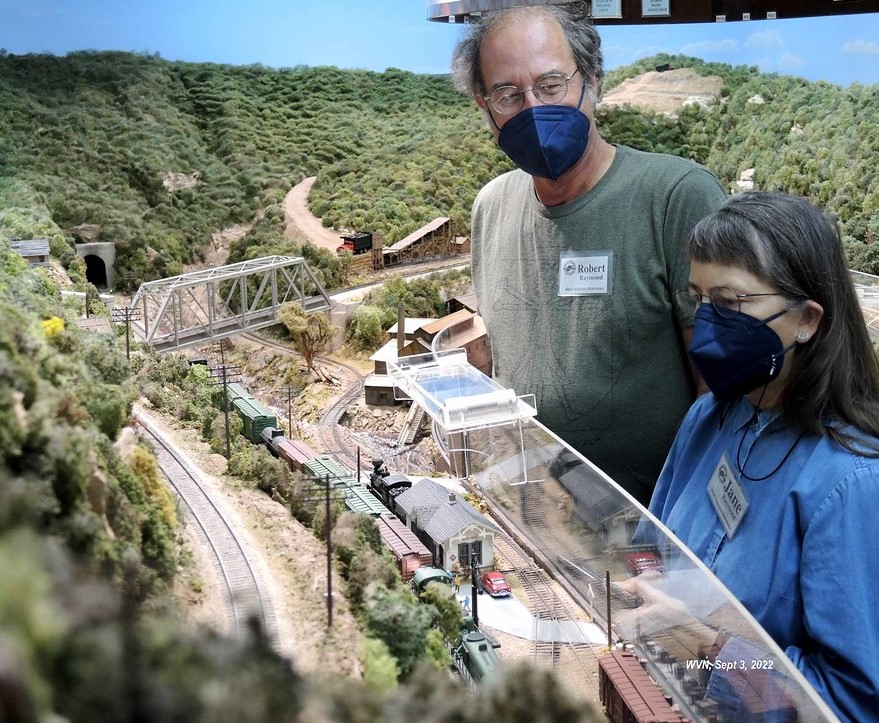 JB and I worked through the day, taking various runs (with a lot of switching) over the line. Our only fly in the ointment was when we got to Harris in the afternoon with the run out of Blackstone. We’d been there in the morning from Clifton Forge and early in the afternoon with the local out of Ashbury. But when we got in with the run out of Blackstone, I was a bit surprised to find the cars in the yard munged together, miss-classified. I’m not sure if we’d left the yard in this poo-poo state or possibly another crew had not quite understood the work. Told JB that we had to clean up this mess besides working out own cut. “Let’s do it,” she nodded. Good girl.

So we cleaned up Harris and ended the session neatly. The N-Trakers run the line like pros (and nobody won the pool of when Sparky would hostle an engine into the Ashbury pit). No major delays and the session ended early (with smiles and complements from the Komars and not a cease-operations order from the ICC like last time). So we did good, both as the Raymond family and as Orlando N-Trak. Good work, guys (and girls)!